Covering an Acid Attack in Managua: A Tale of Partisan Press, a Russian Woman, and a T-shirt

Yesterday, at around 3 pm Managua time, a woman walked into the Cathedral of Managua. She headed to the confessional where she found Fr. Mario Guevara, the Cathedral’s vicar. The woman confessed and was absolved.

This would have been an unremarkable encounter, but it isn’t. The same woman attacked Fr. Guevara with acid a few minutes later. Now, two versions of the attack are circulating among local media, as the orteguista and the independent press present differing accounts.

The orteguista account highlights that the woman, 24-year-old Russian citizen Elis Leonidovna Gonn, supports abortion, based on what she was wearing at the time. For example, El19digital’s article about the attack describes Gonn’s attire as bearing “the image of a baby inside the womb, being stabbed by a knife. This is a reflection of a person that promotes a culture of death.”

A similar statement can be read on TV’s Viva Nicaragua 13’s (Canal 13) website, which describes Gonn as “wearing a t-shirt that clearly shows her support to campaigns that go against the lives of innocents.”  However, whereas El19 and Channel 13 buried the lead, Canal 8 puts it proudly forward on the headline:

“Woman with abortionist propaganda splashes priest with acid inside the Cathedral of Managua.”

In case you don’t know this already, El19Digital is an official regime publication, and Canal 13 and 8 are directed by the Ortega offspring. Camila, Luciana, and Maurice Ortega Murillo co-direct Canal 13. Juan Carlos Ortega Murillo directs Canal 8.

Aside from framing the attack as linked to “abortionists”, orteguista media did no reporting whatsoever. Instead, they reprint the Orteguista Police’s official press release. In it, the OP states that the woman “came to the temple to participate in sessions of prayer and exorcism.”

None of these publications include the official statement from the Archdiocese, released shortly after the attack. Unlike orteguista coverage, the Archdiocese did not speculate about the motives of the attack. Instead, they described the cause as “regrettable” and as “being currently under investigation by the authorities.” 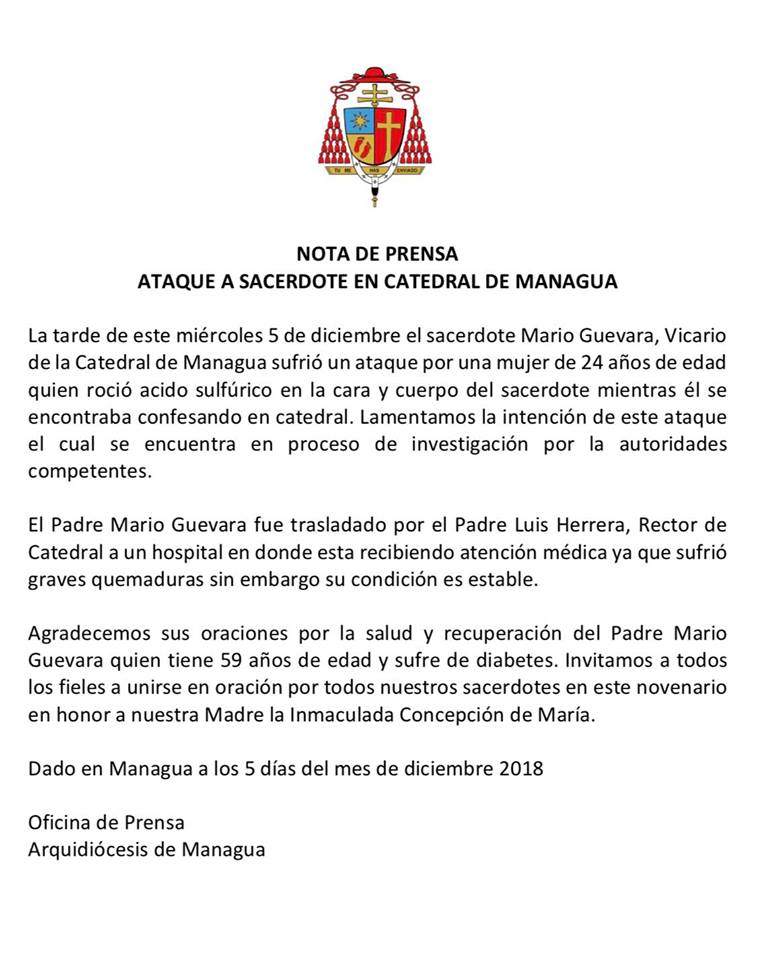 On the other side, independent media frame Gonn’s actions as a result of Ortega’s attacks on the Catholic Church, which have led to an overall atmosphere of hostility against clerics. La Prensa, for example, published this claim as the lede in an article by Cynthia Torres:

Three days after dictator Daniel Ortega attacked the bishops of the Catholic Church again, accusing them of instigating crimes, and after the release of a video in which an orteguista fanatic threatened Cardinal Leopoldo Brenes with death, a Russian woman, identified as Elis Leonidovna Gonn, threw acid on the vicar of the Cathedral of Managua, Mario Guevara.

The language here is anything but subtle, as Torres strongly argues for a causal link between Ortega’s latest speech and the attack on Fr. Guevara. El Nuevo Diario, on the other hand, uses a more subtle tone to point out that the attack “occurred at a moment in which the relationship between the Catholic Church and the Government are tense, after Daniel Ortega accused the bishops of supporting an alleged coup against him.”

Neither La Prensa nor El Nuevo Diario mention the t-shirt. Instead, through interviews conducted with witnesses of the assault, both publications imply that Gonn was under some kind of satanic spell. For example, La Prensa approached Fr. Silvio Romero, who described Gonn as “demon-possessed”,  while El Nuevo Diario spoke Mr Jose Pineda and Sister Arely Guzman (misidentified as Aracely Guzman). Mr. Pineda noted that she “had a vacant stare,” and Sister Guzman stated that Gonn had said that, “The devil had sent her to kill a priest, and if she didn’t, she would die.”

El Nuevo Diario also spoke with two experts who explained the effects of sulfuric acid and described the regulations imposed on sales of this controlled substance. La Prensa included no expert statements, but both dailies included the official statement from the Archdiocese.

Under normal circumstances, the police would conduct a professional investigation of the incident. Unfortunately, the OP has abandoned professionalism altogether, and public confidence in its actions is at an all time low, as shown by recent Gallup Poll.

Gallup’s latest survey on public perceptions of security highlighted that confidence on the police dropped 17 points, from 57% to 40%, since 2017. According to Gallup, “Police crackdowns on anti-government protesters […] likely did not help security perceptions“. The survey was published on November 19.

The Orteguista Police’s reputation is in the crapper, and it is a serious issue, as it will undermine any kind of investigation or even procedures that would be routine, if performed by a professional investigative body. For example, a psychological evaluation of Gonn would be warranted to ascertain if she is mentally competent. Such an evaluation might be in the works, according to Articulo 66, an online publication based in Managua. Articulo 66 claims to have uncovered a plot to declared Gonn non compos mentis, so that she won’t be held responsible for her actions:

At 9 pm on Wednesday, December 5, the Government of Daniel Ortega ordered a group of doctors, among them a psychiatrist and a psychologist from the medical examiner’s office to head to […] El Chipote, where Elis Leonidovna Gonn is being held. […].

A police source in El Chipote, leaked the information to Articulo 66. The source said that “right now, the doctors are meeting with the bosses, to plan what they’re going to say tomorrow when they present the Russian. The plan is to declare her insane.

Articulo 66 also alleges that the attack and the cover up were ordered by the same person, Fidel Moreno, the political secretary at Mayor’s office in Managua. Moreno is among the orteguista officials that have been sanctioned under the Magnitsky Act, for human rights violations. Articulo’s informant claims that “the plan was for the Russian to throw acid at the priest and run away, but things went wrong because the people who were at the Cathedral caught her. Now [they] have to act and declare her a psychiatric patient.”

I have issues with Articulo 66’s reporting. For one, it relies on a single source, though I can certainly understand that it would be impossible to find corroboration within the OP, prior to publication. Secondly, the article implies that if the OP declares Gonn mentally unstable, that would prove the existence of the aforementioned plot. That’s circular logic for sure, but it is also awful reporting. The sad thing is that the scenario described in the article confirms what many Nicaraguans already believe about a police force and a regime that has done irreparable harm to Nicaraguan citizens and to public trust.

That said, Gonn’s motives might never be established to anyone’s satisfaction. Nevertheless, the media coverage very much illustrates the rift in Nicaraguan society, with one side framing it as a pro-abortion attack against a pro-life institution, while the other describes it as the expected consequence of the regime’s virulent attacks on the Catholic Church and/or demonic influence.

As a media scholar, I know that the media provides only imperfect renditions of events, and both sides include statements that are speculative at best, and outright manipulative at their worst. Still, the orteguista media is definitely the worst offender. They do no actual reporting. Instead, they reproduce a press release verbatim, and use the non-sequitur to suggest support for abortion as a motive.

Mind you, I am not familiar with the clothing preferences of the pro-choice supporters who are Russian, but I’ve never seen any pro-choice messaging that frames abortion as stabbing a baby with a knife. In fact, that would be the worse kind of messaging, as it would simply reiterate the argument of the pro-life side, which sees abortion as murder.

In Nicaragua, pro-choice activists argue that abortion is a choice, and that Nicaragua’s absolute ban on abortion represents a threat to women’s health, life, and basic human rights.

In other words, Gonn’s t-shirt does not represent mainstream feminist views on reproductive rights in Nicaragua, but highlighting it explains the attack on Fr. Guevara, at least as far as the orteguista media is concerned.