Denis Moncada’s Friday at the OAS 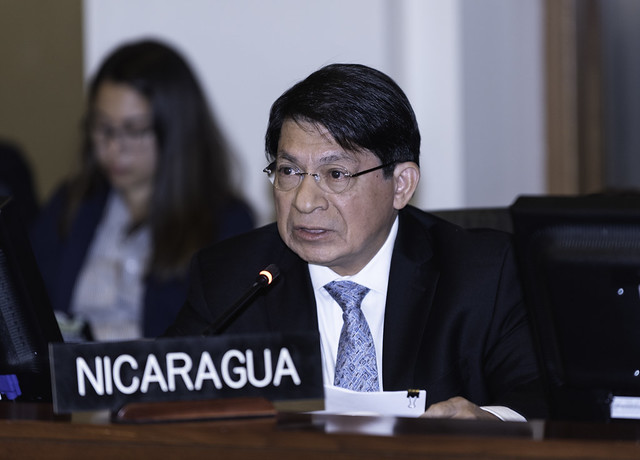 The Permanent Council of the Organization of American States took the first step towards the application of the OAS Democratic Charter this morning. The PC met today at the request of Secretary General Luis Almagro, who invoked Article 20 of the Democratic Charter. Article 20 states that when the constitutional order in a member state suffers “an unconstitutional alteration”, any other member state or the Secretary General can ask the Permanent Council to meet, in order to “undertake a collective assessment of the situation and take such decisions as it deems appropriate.” Mr. Almagro warned the Nicaraguan dictatorship that the OAS would be taking this step during his speech to the Permanent Council on December 27. At the time, Mr. Almagro said that the “logic of a dictatorship was installed in Nicaragua, and the OAS must act to protect and defend. We are obligated to begin the process of applying Article 20 of the Democratic Charter.”

Foreign Minister Denis Moncada represented the OrMu dictatorship in Washington, D.C. He delivered a thirty-five minute speech that added no new insights. Instead, he repeated the dictatorship’s main claims and arguments, which have not changed in any significant way since Moncada uttered the words “soft coup” back in May, at the meetings of the National Dialogue. Four of the main orteguista propaganda outlets, Tn8, Canal 4, El 19 Digital, and Viva Nicaragua 13, reproduced the speech in its entirety. They used the same exact title —  The United States Uses Almagro as a Coup Operator” — and an image of the Nicaraguan flag to accompany the text. 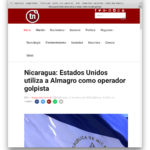 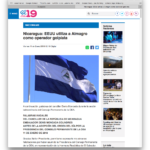 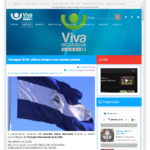 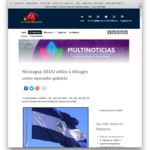 The speech was unremarkable in content, albeit lengthy. El 19 Digital published an English translation that is 35-pages long. Here are the highlights:

The speech starts with the boilerplate rejection and condemnation of  whatever the OAS is trying to do. It’s a plot by the United States anyway. The words illegal and illegitimate pop up for the first time.

Beginning in paragraph 2 Moncada starts attacking Secretary Almagro. The diminutive Nicaraguan minister accuses Mr. Almagro of supporting terrorist groups acting against “the Nicaraguan people.” He expands on that idea in paragraph 6, by he calling Almagro “an agent at the service of the Government of the United States.” Then, in paragraph 7, he adds that Mr. Almagro is “a coup agent against the Nicaraguan people.” The Secretary ignores the illegal actions of coup mongers, according to Moncada, as he also ignores the covert USAID financing of Non-profit organizations that were just waiting to pounce and overthrow the “legitimately elected government of Nicaragua”

Paragraphs 3, 4, and 5 present the dictatorship’s interpretation of the Democratic Charter. The main argument presented here is that application of the Charter to Nicaragua is actually a violation of the spirit of the charter, as they ignore the principles of non-intervention, respect for sovereignty, and self-determination. Moncada argues that you need “prior consent of the Government concerned to activate the Democratic Charter.” The argument conflates articles 17, 18, and 20 of the Charter, all of which have different requirements and means of activation, as follows:

Nikken (2006) offers a relevant example that would merit the use Article 20:

In general, this is a scenario in which a government policy exists that openly or indirectly aims to violate or undermine the Constitution, with grave harm being inflicted upon the essential elements of democracy or the fundamental components of its exercise. Such a situation may emerge from a single act of extraordinary seriousness, such as the breaching of the independence of the judicial branch by its subjugation to another of the branches of government, the annihilation of freedom of expression in its entirety, or the abolition of the submission of the military to civilian authority (without having reached the point at which the military has taken control of the state).The scenario described in article 20 could also be the result of actions that affect several of the attributes reviewed in articles 3 and 4, such as the systematic violation of human rights (including, for instance, social rights or freedom of expression), or the destruction of political pluralism by means of a perverse electoral system (p. 66-67).

Following Nikken’s argument, the application of Article 20 is warranted and justified, regardless of OrMu’s insistence that such an action is interventionism in the domestic affairs of Nicaragua. After all, according to OrMu, what happened in the country was an attempted coup, which was defeated.

Indeed, this has been the dictatorship’s recurrent narrative, and Moncada, true to form, uttered the word coup 23 times throughout the speech. The first mention is in paragraph 4 of the speech, where Moncada accuses the Secretary General of using the OAS to give “continuity to the coup plan designed for Nicaragua,” and the final mention comes in paragraph 45, in which Moncada demands that the Secretary General and the Permanent Council “must cease and desist from any actions that [encourage] terrorist groups that carryout (sic) the failed coup in Nicaragua.”

And why did these terrorist groups attempt a coup? the answer comes in paragraph 10 and 11. The disgruntled opposition simply did not like the progress that Nicaragua was achieving with Daniel Ortega at the helm:

These advances were not liked by some opposition groups, because they saw in these advances, also an in- crease in the acceptance and positive rating of the Government by the population.

In other words, the opposition decided to destroy the nation, rather than accept that a Sandinista administration could do anything right. “Do they resent the fact that women in Nicaragua have a leading role and that their rights are respected?” said Moncada? This is most likely in reference to the World Economic Forum’s 2018 Gender Gap report, which listed Nicaragua as one of “the ten best countries to be a woman”

These are the 10 best countries to be a woman https://t.co/cUhJCXkp7H #gender pic.twitter.com/3A2jN7cAMH

The World Economic Forum describes its gender gap index as focusing on “gender equality” rather than “women’s empowerment”. This is an important distinction, as the WEF believes that measuring the gender gap shouldn’t be about figuring out if women are more empowered in a society. It should be about whether or not they have achieved equality with men.  The problem with this approach is that it minimizes issues that disproportionately affect women, such as reproductive rights and sexual violence. In fact, the report doesn’t even consider reproductive health and/or rights, or mentions sexual violence against women and girls as an issue that should be consider when assessing “gender equality” in a country.

As long as there are women cabinet members, everything is awesome!

Or, it was awesome, at least until April 18, which is when everything went to hell, according to Moncada’s speech.  Beginning on paragraph 12, the text states that opposition engaged in acts of terrorism, torture, arson, and generalized mayhem, that the protests were not peaceful or civic, and that “various NGO’s” financed “the attempted coup” using moneys from USAID. Moncada also said that the Government acted in good faith at the national dialogue, only to be rebuffed by “the coup perpetrators”, who stated that “This is not a session to dialogue; it is a session to negotiate your resignation… surrender!”

Anyone who watched the first session of the dialogue will remember the moment in which Lesther Aleman confronted Daniel Ortega on May 16. Moncada’s truncated version does not capture the full impact and meaning of what Aleman said:

We have listened to you for 12 years. President. We know the history. We don’t want to repeat it. You know what the people are. Where does power come from? It comes from the people. We are here, and we have accepted to be in this dialogue, with all due respect to all of you, in order to demand that you order the immediate stop to the attacks that are being carried out in our country. If the Interior Minister was here, we would ask him, but you are the supreme commander of the National Police and of the Army of Nicaragua. That is why we ask of you, right now, that you order the cessation of these attacks, repression, and murders carried out by paramilitary forces, by your troops, and by the mobs of government sympathizers.

You know full well the pain we have endured in these 28 days. Can you all sleep at night? We haven’t slept peacefully. We are being persecuted. We are students.

And why and I addressing you here? because [Students] are getting killed; students are disappearing. Those who have been kidnapped, they are us. […] This is not a dialogue table. This it is a place to negotiate your exit, and you know that very well because the people have asked you for it. Here is this entire sector pleading with you, as supreme commander of the Police, that you order an immediate cease fire. Immediate! […] Who can we ask that from? Is there anyone else we can ask for a cease fire? If that were in my hands, I tell you, I would have never allowed it. In one month, you have destroyed the country. It took Somoza years, and you know it. […] The people are out on the streets, and we are here at the negotiating table demanding a stop to the repression. Know this, Surrender to the people! You may laugh and make mocking gestures, but we are still asking you to order the cease fire right now. Free our political prisoners. We cannot dialogue with a killer, because what is happening in this country is a genocide.

Now, Moncada characterized an excerpt of Aleman’s speech as “an assault on the democratically elected government through illegal actions,” rather than a plea from a Nicaraguan citizen to the one person who could have ended the crisis, but chose to escalate it.

The dictatorship’s narrative continued, without offering any new ideas. By paragraph 23, it is clear that the only things Moncada will insist upon are that there was a coup, that the Democratic Charter is being misused, that the United States is behind everything, that the coup mongers want to destroy Nicaragua,  and that OrMu are the real victims. For good measure, Moncada throws in the Monroe Doctrine, just in case you didn’t get it that it’s all a US ploy.

Regardless of Moncada’s efforts, the OAS Permanent Council completed its first session, applying article 20 of the Democratic Charter, which mandates an analysis of the situation of the country as a first step before taking more drastic measures.