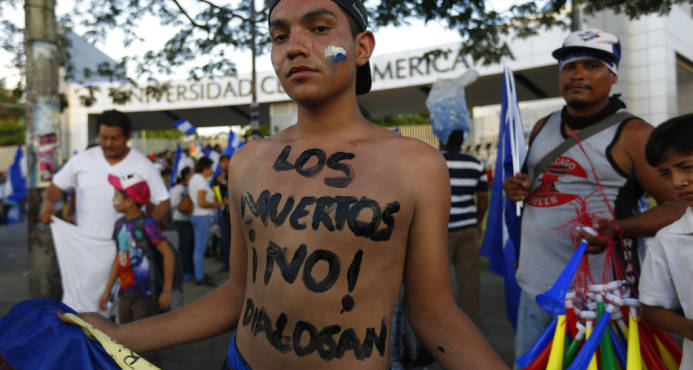 Author’s Note: This post has been updated to include the names of the Alianza’s negotiating team, including alternates and advisors, and their affiliations, as well as the official government announcement of the new national dialogue.

Roberto Zamora, president of the Lafise financial group, is in Madrid on business. He granted an interview to EFE press agency, in which he spoke about the ongoing crisis in Nicaragua, its economic and financial ramifications, and the need for a dialogue.

Zamora is one of the five Nicaraguan businessmen who met with OrMu over the weekend. The Catholic Church, represented by Cardinal Brenes and Apostolic Nuncio Somertag, was also present.

Zamora told EFE that the “dialogue starts tomorrow,” though businessmen like himself won’t necesarily be in the negotiations. “We will not necessarily be at the negotiations. What we wanted was to be a bridge, so that communication can be reestablished. [Communication] was totally tense,” he said.

Later, Zamora spoke to Confidencial, to clarify that the Dialogue will resume on February 27. The date was later confirmed by Ortega himself, during a nationally televised address. He also said that there will be no media allowed to broadcast the proceedings, which will involve a smaller number of participants, in strong contrast to the first attempt at a national dialogue.

Confidencial also confirmed that the Government will negotiate with the Alianza Civica. The Alianza Civica then announced its negotiating team, with six main negotiators and six alternates.

The Alianza’s team, in other words, is majority male. When you look at the main negotiating group and its alternates, the team includes six representatives of the business community — Chamorro, Aguerri, Arana, Healy, Arguello, and Vargas — two public intellectuals and educators — Tunnerman and Medina –, one member of the Liberal Party — Pallais –, two student leaders — Jerez and Valle — and one woman’s rights activist  — Solis. Interestingly enough, there are no representatives from any of the organizations speaking for political prisoners (e.g., the Comite Pro Liberated de Presos Politicos), or the victims of the repression (e.g, Madres de Abril), or the peasant’s movement.

On Saturday, OrMu and the Archdiocese of Managua issued identical press statements that recognized the need for an “inclusive, serious, and honest encounter.” However, many in Nicaragua and abroad question the dictatorship’s good will. Recent actions against political prisoners, as well as the heavy presence of business representatives in the Alianza’s team, are questionable decisions. For an alliance who is supposed to speak for everyone, they certainly chose a team of main negotiators with very similar backgrounds and views, with the exception, of course, of Max Jerez, the student leader.

How inclusive is this dialogue going to be in reality? How much will business and economic interests weigh in regards to negotiating priorities and strategies? and,
why is the Alianza so eager for a sit down, without any guarantees, particularly in regards to the release of political prisoners and the end of the repression?

Indeed, the release of political prisoners is one of the top preconditions that many in Nicaragua demand from the OrMu administration. Nevertheless, on Monday, barely two days after the meeting between OrMu, Carlos Pellas, Ramiro Ortiz, Roberto Zamora, and two other prominent businessmen, an Orteguista judge sentenced Medardo Mairena, Pedro Mena, and Luis Orlando Icabalceta to a combined 518 years of prison.

If that wasn’t enough, on Wednesday, Julio Montenegro, legal counsel the Permanent Commission on Human Rights (CPDH, by its Spanish acronym), described via Twitter how prisoners were beaten and tear gassed on February 18 and 19, after guards took umbrage at inmates singing the national anthem. According to Montenegro, members of the police’s special forces used nightsticks to beat prisoners and then dosed them with tear and mustard gas.

Montenegro says prisoners took refuge inside their cells, blocking doors and windows with mattresses. Police officers outside threw rocks, tear gas, pepper spray, and stun grenades. Shots were also fired from a guard tower, though no one was wounded. At one point, prisoners struck back with whatever was available, including bars of soap and bags of pinolillo (a cereal drink made out of cacao). Finally, the police cut off the water supply.

At the end of the siege, which lasted about 3 hours, there were at least 40 wounded prisoners.

Zamora’s statement to EFE does not mention political prisoners, ongoing repression, and other violations of human rights. Instead, he focuses on the financial aspects of the crisis. While this may very well be his priority, it does not rank highly among the concerns that many Nicaraguans have at this point. For example, financial Analyst Julio Francisco Baez Cortez tweeted out this warning: “Starting a dialogue while our […] political prisoners are not free is forbidden! That is an absolute precondition! Negotiating for crumbs of frozen taxes is forbidden!”