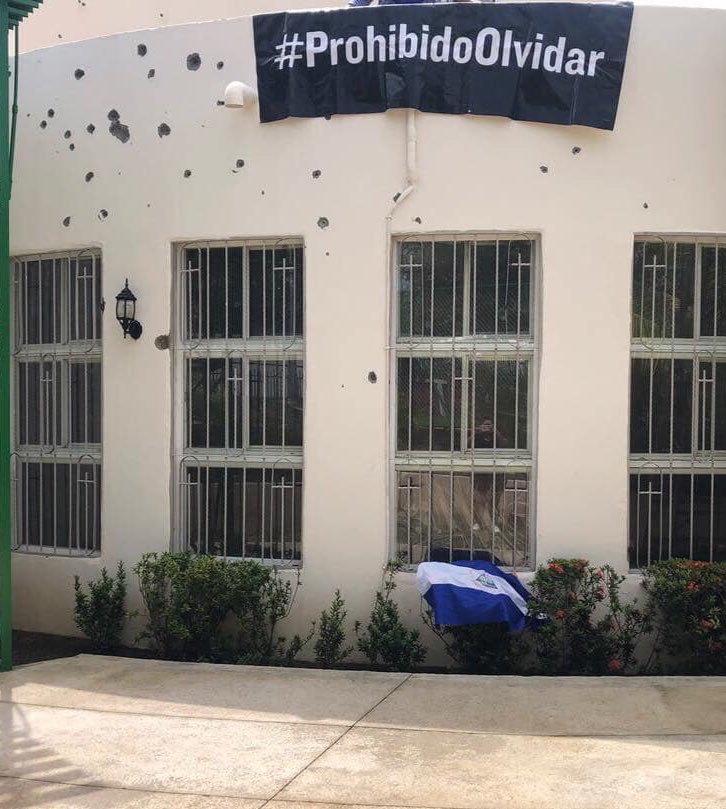 On the afternoon of July 13, 2018, as Daniel Ortega and Rosario Murillo made their way to Masaya for the annual Repliegue, the dictatorship’s police and paramilitary made one final push to dislodge students from the UNAN-Managua.

The students had occupied the campus on May 7. After about about four hours of attacks, paramilitaries broke through the barricades and into the campus. Students managed to evacuate; many took refuge inside neighboring Divina Misericordia Catholic Parish, which then came under attack as the paramilitaries and police gave chase. After nearly 19 hours, the UNAN campus had been overrun; the church’s walls were riddled with bullets. Two students were dead, and a nation was in shock.

The attack on UNAN-Managua and Divina Misericordia left an indelible audio-visual record. Events were shared by students under siege as they unfolded, and by journalists who were trapped for hours inside the besieged parish. Now, audio and video recordings are re-circulating, as a remembrance of the victims and a denunciation of what transpired during those hours.

The Hora Cero team captured two minutes of the attack, which had been going on for 12 hours when the recording was made originally. The team re-shared it to mark the anniversary. In the video, an off-camera voice can be heard saying: “It is truly sad the asymmetry we’re subjected to. You can hear the shots fired on the video. Those are high caliber weapons.”

Paramilitary attackers also filmed their actions against the UNAN-Managua students. This video, for example, was utilized by Bellingcat’s Giancarlo Fiorella to establish what kind of weapons had been used by paramilitary and police in the raid. Fiorella identified a Remington 700/M24SWS rifle, an M16A1 assault rifle, AK ammunition, and a “Soviet Pattern 75 round drum, possibly Russian or Romanian.” He also pointed out that the two-way radios appearing in the videos were similar to those used by TAPIR, Nicaragua’s equivalent to a SWAT team.

Using visual cues, Fiorella also determined that this group of students was on the receiving end of the paramilitary and police push. Towards the last seconds of the video, a female voice can be heard saying “and we’re all going to die.” Morimos todos.

Throughout the afternoon and into the night, more videos came on line. They showed students pleading for help, wounded being cared for, and dramatic farewell messages to family and friends.

Students described the attacks as merciless, as shown in this video. “We’re under attack. They haven’t stopped, and we only have rocks and home-made mortars. We’re all behind the barricades because they’re shooting to kill,” says the off-camera narrator.

But perhaps one of the most emotive videos from that day is this one, showing Valeska Sandoval and Fredrych Castillo as they say goodbye to their parents.

Sandoval, a law student, was held for two days in El Chipote after the attack. Upon release, a video of her began circulating. Sandoval confesses to crimes and acts of terrorism, implicates the MRS political party, and names specific students as ringleaders of the UNAN occupation. Sandoval later told the Daily Beast that she had confessed under duress.

As for Fredrych Castillo, he was convicted to 16 years in prison for “acts of terrorism,” and illegal possession of firearms. Castillo was transferred to house arrest on April 5.

The Siege of Divina Misericordia Parish

At approximately 4:30 pm on July 13, the paramilitaries and police broke through the barricades and took over the campus. The students who managed to escape took refuge inside the Divina Misericordia parish. Along with the students were also journalists José Noel Marenco, of 100% Noticias, Ismael López of Reuters, and Joshua Partlow, of the Washington Post.

Ambulances and human rights workers have not been able to enter

Marenco’s broadcast from inside Divina Misericordia has been shared and viewed thousands of times, since he originally published it, on July 13. In this one-hour broadcast, Marenco describes the situation inside the parish as dire. There are wounded, bleeding out, that cannot be evacuated because paramilitaries have surrounded the area and will not allow aid workers to come near the church.

At around 10 pm,  ambulances were finally able to evacuate the wounded. Partlow was also allowed to leave. Everyone else was forced to stay.

According to one survivor of the siege, who goes by the Twitter Handle @NinjaRyuk, the attack resumed as soon as the ambulances left. At approximately 5 AM, Gerald Vásquez was shot in the head. “No one could believe it, until they saw the gun shot to his head. Then, everyone started crying. They did everything they could to save him.”

A Caravan Travels through Managua

Many Nicaraguans did not just watch videos of the attacks. At approximately 10:30 pm, a call went out via social media, asking people to caravan to the Divina Misericordia Parish. The area had been cordoned off by police patrols. Citizens proceeded to stage a sit in.

The siege ended at around 7 am on July 14, after the Episcopal Conference succeeded in negotiating the withdrawal of the paramilitaries and police. Students were then evacuated to the Managua Cathedral.

One-year after the attack, not a single paramilitary or police officer has been investigated for their participation.

Under the Ortega-Murillo Amnesty Law, anyone who attacked the UNAN and the Divina Misericordia is now shielded from investigation and prosecution.

Instead, the Ortega-Murillo police continues harassing and intimidating Nicaraguans. On even of one-year anniversary of the attack that left Gerald Vásquez and Francisco Flores dead, the police deployed several units and dozens of officers to the Divina Misericordia parish.

The police were still in the area the following day, as many Nicaraguans participated in a memorial service at the parish.

During the recent OAS General Assembly, OAS members approved a resolution on Nicaragua, pledging to “to appoint a commission so that, within the framework of Article 20 of the Inter-American Democratic Charter, it may carry out diplomatic efforts at the highest level to seek a peaceful and effective solution to the political and social crisis in Nicaragua and to submit a report within a maximum of 75 days.”

Almost three weeks have passed since the OAS vote. The commission has yet to be named.