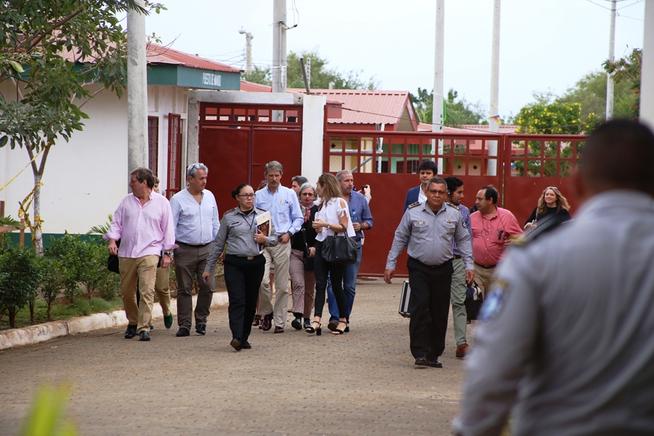 When a delegation from the European Parliament approached Daniel Ortega and Rosario Murillo (OrMu) for permission to visit Nicaragua, the two co-dictators said no because some of the members of the delegation had said uttered “threatening or disrespectful statements” against OrMu. A few days later, the European Council did, in fact, issue a statement condemning OrMu’s repressive tactics against civil society. The statement concluded with this ominous warning:

The Council underlines its readiness to use all its policy instruments to contribute to a peaceful negotiated way out of the current crisis and react to further deterioration of human rights and rule of law.

OrMu retreated. Eleven members of the European Parliament (MEPs) arrived on Wednesday, January 23 to meet with “representatives of the Government, the opposition, civil society and the church, as well as journalists and students”.

Visits like this one are not without precedent. However, there was something very different in regards to the access MEPs were granted. They were allowed to keep and use their phones throughout the visit. MEP Ana Gomes from Portugal certainly made use of this rare privilege, and though several of her impressions were shared after the end of the visit, she provided an unfiltered audio-visual record of her four days in Managua. Her tweets start innocuously enough, with an image of the front page of La Prensa, which she captioned in Portuguese. “The mission of the European Parliament has arrived in Managua. This the front page of a newspaper”, she writes.

Gomes continued tweeting images from meetings she attended and buildings she visited.

#EP mission now at the National Assembly of #Nicaragua with President Gustavo Porras and other MPs pic.twitter.com/ijXhFpYxWE

Gomes’ tweets switch tone after the end of the visit, when she began sharing her unfiltered impressions. For example, she posted this series of tweets, documenting the strong police and paramilitary presence in Managua. “It struck me there were very few people in the streets, differently from what I saw some years ago”, she writes.

#EP mission to #Nicaragua – armed police & paramilitary at every major corner in the city of #Managua. It struck me there were very few people in the streets, differently from what I saw some yrs ago pic.twitter.com/4jSXFGSasH

#EP mission to #Nicaragua – armed police and paramilitary at every major corner in the city of #Managua. It struck me also there were very few people in the streets, differently from what I saw some yrs ago pic.twitter.com/Ec2YHkrjvJ

#EP mission to #Nicaragua – armed police and paramilitary at every major corner in the city of #Managua. It struck me also there were very few people in the streets, differently from what I saw some yrs ago pic.twitter.com/nqzKahEWfQ

Then, she started addressing Ortega directly

#EP mission to #Nicaragua – Members with mothers, fathers & relatives of people, mostly young people, killed and arrested since April 2018 popular protests. Do not continue to harass, intimidate & persecute these citizens, Pres. Ortega!. Then, it will become personal with us. pic.twitter.com/MjFo2G7QQk

4. #EP mission in #Nicaragua – #EU can, must help! Above all those crying for freedom, justice, democracy. Genuine dialogue must lead to free, transparent elections. Ongoing brutal repression violates Agreement with EU – if not stopping, #sanctions must target those responsible.

6. #EP Mission to #Nicaragua -Young women, mostly students, in La Esperanza jail, 15 of them in a 20 sq meter cell: we came inside & saw. Despite the suffering, they are strong in their patriotic & ethics for their people & country.Jail is not breaking them.They keep fighting.

7. #EP mission in #Nicaragua was allowed to visit jails & talk freely to prisoners. Appreciate that. Shows #EU can make difference. Must push & facilitate genuine national dialogue.Duo Murillo/Ortega may be on fence waiting what’s to follow with rotten Maduro. May be too late!

Gomes is not diplomatic at all in this tweet.  Usually, photos like this one will be accompanied by a simple caption describing who was at the meeting. Not this time. Gomes wrote “Outside luxurious nature. Inside, it smelled like a mortuary.”

#EP mission in #Nicaragua – meeting President Daniel Ortega & Vice-President Rosario Murillo, his wife. Outside luxurious nature. Inside, it smelled like a mortuary. Many natural flowers mixed with plastic ones… pic.twitter.com/6FN6chYWrf

However, the most dramatic portion of MEP Gomes’ account of the trip are the videos she took during the delegates’ visit to La Esperanza Women’s prison. She released those videos via YouTube and Twitter. The first two videos show a group of political prisoners answering questions from behind bars (translations are mine):

MEP: How long is your sentence

Prisoner 1: I received a sentence of 51 years.

MEP: How many crimes were you accused of?

MEP: What are they?

Prisoner 2: They won’t even let us make phone calls. They won’t let us contact our families

MEP: How many months have you been here?

MEP: Can your family come see you?

Prisoner: They let us out today because you are here

Female MEP (presumably Gomes): And how long have you been here?

Prisoner (with glasses): We are 15 political prisoners

Gomes: In this hall?

Prisoner 2: There is a 55-year old woman with us. She has lupus. She’s been here for a month, and she has not received any treatment. She is alive by the grace, by the grace [of God].

Gomes: and you are here for common crimes, or …

Prisoner 1: We are political prisoners

Other prisoners: We are political prisoners. Terrorists, like they call us

Prisoner 1: We’re charged with terrorism. We are political prisoners.

Amalya Coppens: We are segregated from the other prisoners.

#EP Mission to #Nicaragua – when we arrived in La Esperanza prison yesterday, near this building, we could hardly believe what that was. We are political prisoners, the women told us… https://t.co/Mf3YT5d40I via @YouTube

Gomes filmed prisoner Olesia Muñoz, from Niquinohomo. Olesia and her sister Tania Muñoz were taken to prison in August, for their support for protesters at the tranques, the barricades that protesters built all over Nicaragua, to pressure the dictatorship into negotiating. Olesia Muñoz was charged with terrorism, organized crime, among other charges. (Translated transcript below)

#EP Mission to #Nicaragua – Olesia Nuñez is more determined than ever to fight for justice and freedom despite sitting in jail as a political prisoner of the Ortega/Murillo regime https://t.co/uRgpZiq1JO via @YouTube

[I am here] simply because I have a leadership role in the church. I am a member of the Catholic Church. The Nicaraguan Catholic Church is very strong. It has power, just like it has power world wide. My populism [popular leadership] derives from religion.

I am a music teacher. I have achieved things with music, with great choirs.

The situation in Nicaragua, when you see a people taking to the streets and supporting the tranques [barricades]… [when you see everyone], I rose up too, with my flag, and because I have a following among the people, that made them [OrMu and their supporters] delirious, that the people rose up, and that [I] had a following, and that all of Nicaragua spoke with one voice to demand Daniel Ortega’s exit.

When they came to my house, they bombed and machine gunned my entire house. I was inside. And then, when they were outside trying to force open the gate at gunpoint, I was able to run into a storage room inside the house, and because the storage room was full of stuff, I was able to hide and they were not able to find me.

I spent eight days inside that storage room, without food or water, and in the dark.

Ana Margarita Vijil [Former president of the Sandinista Renovation Movement, MRS], I greet you. I want to tell you to keep moving forward with the people of Nicaragua. Keep on fighting. Don’t give up.

Us, even in jail, even while suffering illnesses and everything else, we stand strong. Don’t accept a negotiation. The blood of our heroes cannot be forgotten. Fight to the end, because we are still resisting even from prison. Viva Nicaragua Libre! [Long live a free Nicaragua]

Another prisoner recorded by Gomes was Irlanda Jerez. Jerez, a dentist turned small business owner at the Mercado Oriental in Managua, organized and led merchants in protests against the dictatorship. Jerez was arrested on July 18, allegedly for fraud. Jerez explained that she had been sentenced without trial, after being “kidnapped […] by a group of paramilitaries, police, and hooded individuals.” Jerez was held in El Chipote for 48 hours, where she says she was denied food and was also drugged.

Jerez told the parliamentarians that her father had also been a political prisoner in the 1980s. “He was incarcerated for speaking out against the very same dictator that has imprisoned me now”, she said.

A few days ago, we heard about your visit, and we heard you would be speaking to the gentlemen that are governing our country unconstitutionally. We hope that the current situation in Nicaragua, which we could say is the most violent situation we have experienced […]

#EP Mission to #Nicaragua – Irlanda Jerez, a brave young woman, explains why she is now, with other women, jailed as political prisoners of the Murillo-Ortega regime, in La Esperanza prison, Tipitapa https://t.co/tjBqa0iOjX via @YouTube

Irlanda Jerez added then that Nicaraguans would always raise their voices against oppression. Like Olesia Muñoz, Jerez does not want to negotiate with OrMu:

“The only way out for Daniel Ortega and Rosario Murillo is to prison. They have assassinated a people for forty years; they have enslaved a people for forty years, and in this place, we [the political prisoners] have been repressed […]. We have been denied medical attention. I spent five months in here without a change of clothes. They have stopped care packages from my family, and they also tried to drag me out in the middle of the night.

#EP visit to #Nicaragua – broken by being thrown in jail by the #Murillo-Ortega regime? NO! They are ever more strong, these brave women political prisoners in La Esperanza prison, Tipitapa. https://t.co/XHDPUq2TeO via @YouTube

Amaya Coppens, a Nicaraguan-Belgian citizen, was also interviewed, in French, and though I don’t speak French, one of the readers of this blog does. Their translation is posted in the comments (thank you!).

Coppens impressed the MEPs, according to Javier Nart. Mr. Nart is a former guerrilla, who fought alongside the Sandinistas in the 1970s.

“I did not speak with [Coppens] but the colleagues who did see her came back  and were very emotional [and impressed] by the extraordinary [human] quality of this woman who could have chosen to claim her right [as a Belgian citizen] to be released, said that she won’t leave unless everyone is released.

Javier Nart talks about Amaya Coppens’ integrity and how she impressed the UE parliament members. To Amaya’s friends around the world, you should be proud to have her as a friend. ⁦@TobyStHill⁩ ⁦@AminahZamora⁩ ⁦@Hilarita_F⁩ ⁦@pauloCanning⁩ pic.twitter.com/UOig0yO7CE

Nart described how, at the end of the visit, the political prisoners sang the national anthem “I have rediscovered that enormous ethical quality that the Nicaraguan people have, which I discovered in 1979. I have an immense admiration for you.”

#EP Mission in #Nicaragua – They are not broken, these brave women. They dare to sing the National Anthem. Many are jailed just for that in the regime of #Murillo-Ortega. Visiting political prisoners in La Esperanza prison, Tipitapa – https://t.co/tDM5xCeS9m via @YouTube

This is an important story. Stay tuned for part 2.