Francisco Diaz Speaks to the Norwegian Press in Revealing Interview. Plus, a Primer on the Volunteer Police. 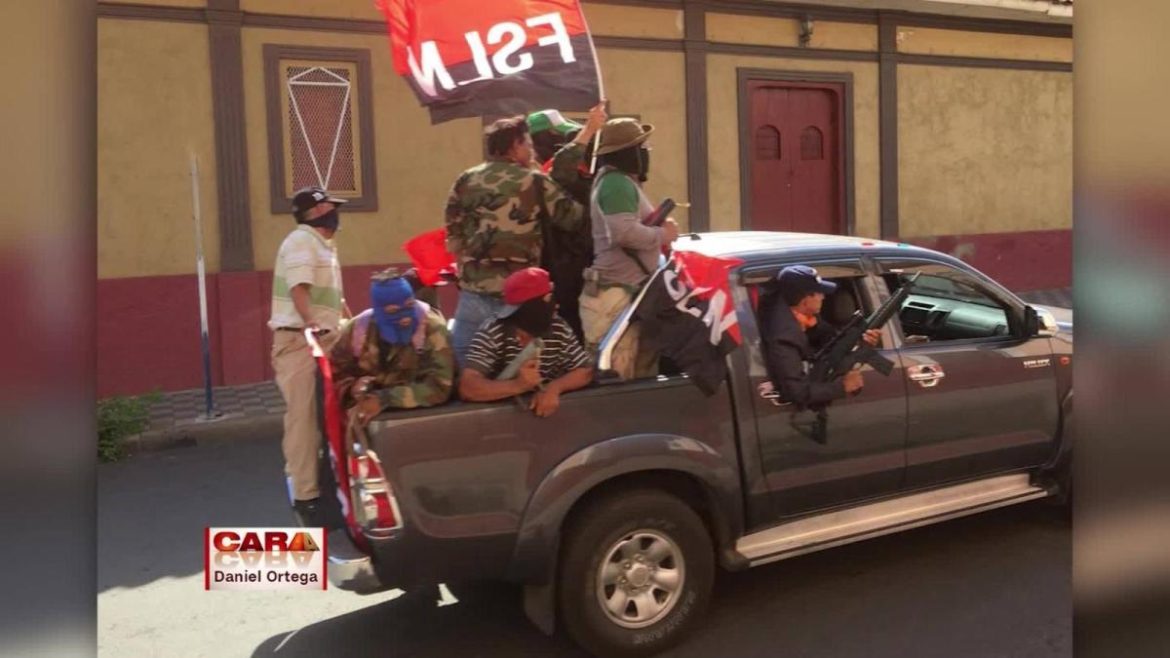 Francisco Diaz, the highest ranking police officer in Nicaragua, sat down with Norwegian journalists Halldor Hustadnes and Henning Lillegard on November 30, 2018 for an interview that was finally published on February 2. Diaz, who was named First Police Commissioner in September of last year, has maintained that the OrMu police force acted within the scope of the law to “defeat a coup”. He said as much in September, as he accepted his promotion, and he repeated it to Hustadnes and Lillegard.

In the video of the interview, Diaz denies that paramilitary, or more precisely parapolice groups, actively participated in repressive acts in Nicaragua, particularly during the “Operacion Limpieza” (Operation Clean Up).

We have what is known as “voluntary police”. That is nothing new […]. If you look at the Law of the National Police, the voluntary police is established by that law. [The voluntary police] has its missions. […] It participates, alongside the professional police, in preventative actions.

Hustadnes then asks, “is it true, then, that these “voluntary police”, as you call them, participated [in acts] against protesters?” To that, Diaz answers, “but they were properly legalized. They took part as established by our legal norms. It was not like the Nicaraguan right wing says”

The next question provided Diaz’ most controversial answer. When asked why these “voluntary police officers” wore masked, Commissioner Diaz stated that they weren’t all voluntary police, but professional officers acting undercover.

They weren’t all voluntary police. There were also our police officers, professionals. Legally, it is established that we can use balaclavas to protect the identity [of our officers].

Next to Diaz sits Jaime Vanegas Vega, the inspector general of the police. Vega intervenes to further clarify what Diaz has just stated, about the participation of professional police officers, mixed in with the “volunteers”

All actions [in the field] are directed by a professional police officer, and the volunteers play a supporting role.

Diaz and Vanegas are not the first to bring up the voluntary police. Daniel Ortega himself used this legal figure to dismiss claims of paramilitary/parapolice involvement in repressive actions against the Nicaraguan people. Ortega’s interview with Andres Oppenheimer was the first time that the dictator brought up the voluntary police. He repeated the claim during his interview with Euronews, adding that the masked individuals were volunteers participating in “special operations”, rather than professional police officers.

So, what exactly is the role of the volunteer police under Nicaraguan law? Just read a little more and I’ll tell you. However, if you’re not interested in the legal precedents, the TLDR version is that the volunteer police is a support organization, subordinate to the National Police. The problem is that the so-called volunteers are legally subordinate to an institution that is entirely partisan, starting with the police chief, who minimizes claims of nepotism even though he is the father in law of Maurice Ortega Murillo, son of Daniel Ortega and Rosario Murillo.

The Volunteer Police in Nicaraguan Law

The volunteer police does, in fact, exist in Nicaraguan law, and as Diaz stated, it is nothing new. In fact, you can trace the history of the volunteer police and similar entities all the way back to the Somoza era. In 1969 (amended in 1970), Anastasio Somoza Debayle instituted the “Civilian Guards” as an auxiliary corps to the Guardia Nacional (GN) (see pdf below). The mission of the Civilian Guards was defined as: “preventing, repelling, and denouncing acts or crimes against property under their guard, or [acts] that threatened the rights and security of the people within their jurisdiction”. In other words, the Civilian Guards combined the role of a security guard and the role of the neighborhood watch, albeit one that is subordinate to the GN and takes orders from the GN. However, since “acts” that threaten “the rights and security of people” is a very broad and vague characterization, the Civilian Guard could potentially be deployed for anything that the GN determined, since Civilian Guards were “under the control and authority of the Ministry of the Interior, though the corresponding organs of the GN Police.”


When the Sandinistas ousted Somoza, they also officially instituted a Volunteer Police Force, through Decree No. 1347 (see below). This time, it was named the Volunteer Police Corps of the Sandinista Police (henceforth, the Corps). As with the Civilian Guards, the Corps would be subordinate to the police, rather than an independent entity. According to this decree, the Corps was established to confront a situation of imperialist aggression:

The situation of aggression by North American imperialism that Nicaragua is living through, makes it indispensable for all conscientious citizens to voluntarily join in the defense of our sovereignty and territorial integrity.

[…] it is the patriotic duty of all Nicaraguans to maintain public order and security. […]. Through the Volunteer Police, our revolution has firmly, decisively, efficiently, and cost-effectively combatted crime and counterrevolution.

The Corps role was defined in Article 4 of the decree as to execute “the functions that are inherent to their conditions as agents of authority, in order to guarantee public order and security. For these effects, it will carry out all assigned tasks, participating and coordinating with the Sandinista Defense Committees* that fulfill revolutionary vigilance.” In other words, the Corps in the 1980s was a politicized organization that functioned in support of a national security state instituted by the Sandinistas.


After the Sandinista electoral defeat in 1990, the Chamorro government reformed the Nicaraguan security apparatus. In 1992, a new police law, Law 45-92, established the role of the police as a civilian professional force. Article 6 of this new law, stated that “The National Police can encourage citizens to voluntarily support the police in the exercise of their functions”. This law was later superseded by Law 228 of 1996, which re-established the volunteer police. Section VII of the law defines the volunteer police as “an auxiliary and support corps to the National Police […], subordinate to [local] police delegations.” Article 45 further explains the role of the volunteer police as:

… mainly supporting the tasks of prevention, vigilance, public security, and transit, which they must carry out while appropriately identified through a uniform and distinctive badges. They will act as agents of authority. In order to guarantee order and citizen security, when they are carrying out their missions, they will be subject to the same fundamental principles of action and disciplinary regime.

The current police law, Law 872 approved in 2014, establishes Daniel Ortega as commander in chief of the police force. It also redefines the volunteer police within a model of community policing that is “preventative, proactive, and communal.” Within this model, the police encourages community participation in order to “jointly identify and solve the main problems of citizen and human security […], through activities that (1) will improve peaceful and inclusive coexistence, within the framework of respect for human rights, freedoms, and constitutional guarantees […]” among other goals.

When it comes to defining the tasks of the volunteer police, Article 25 of Law 872 states that they “only act in supportive roles, in preventative tasks, such as surveillance, patrol, traffic control, and in cases of natural disasters.”  In addition, Article 25 states that the volunteer police “helps the authorities when [volunteers] have knowledge of a crime, preserving the scene, helping victims, and informing the appropriate authorities.”

The Volunteer Police, A Recurrent Problem

The figure of the volunteer police has been problematic throughout its existence. For example, the State Department’s 2001 Human Rights’ Report identifies several instances in which the volunteer police broke the law and/or violated human rights. “The National Police provide them with a uniform, and in some cases, with a gun, at the discretion of the police chief. Voluntary police do not receive a salary from the state, and do not receive any professional training”, stated the report.

Indeed, even the Nicaraguan Police recognizes issues with the volunteer police since the 1980s. A 2011 report on the Community Policing Model indicates that “due to irregularities and abuse of power, it was decided that only professional police officers would work in cities. Volunteers would only be used in the rural areas” (p. 13) However, the report does not explicitly describe instances of abuse.

The report also includes a section outlining “best and worst practices” in regards to community policing. Among the worst practices identified are the “attitude of some chiefs who do not pay the required attention to the problems stated by the community, which lessens the credibility of the National Police”, and the “lack of a homogenous guideline about the work of the voluntary police. Some police chiefs see them as support, and others see them as a burden” (p, 17).

Compounding these issues, the laws that govern the volunteer police in its different incarnations have always included vague language about protecting security, and/or assisting in the maintenance of order. Such language can and has been interpreted  in ways that support the partisan deployment of a resource that should be acting for the benefit of the community. Instead, as Diaz and Daniel Ortega himself have indicated, the voluntary police has been deployed  to aid in acts of repression, and authorized to use excessive and illegal force, all in the name of “security” (see, for example, OAS Report, June 2018).

*The Sandinista Defense Committees (CDS, by their Spanish acronym) were neighborhood organizations, once described as “the eyes and ears of the revolution.” Revolutionary vigilance, on the other hand, was a euphemism for spying and informing on anyone suspected of being a counterrevolutionary. The model of the CDS lives on currently, in the form of the Concejos del Poder Ciudadano (CPCs), or the Councils of Citizen Power.