This was the opening sentence in a story about Jason Collins. It was posted on ESPN on the day Mr. Collins came out.

“NBA center Jason Collins on Monday announced that he’s gay in a story for Sports Illustrated, becoming the first active player in a major American team sport to announce that he is gay.”

I have bolded two assertions I find interesting and maddening. First, it is clear, once again, that major American team sports is a label reserved for male competitive sports. In the United States, this includes football, baseball, basketball, and hockey. That means that even though there have been players competing in team sports while openly gay or lesbian, their stories have not been granted the cultural significance that  Mr. Collin’s has. Their sports are  neither “major”,  nor “team” sports. Moreover, some of the athletes in question are either not “active, and they might be  women.

Now, I am not surprised when mainstream publications like Sports Illustrated frame a story like this one as a momentous occasion. I am also not dismissing Mr. Collins’ coming out. Having gone through it myself, I know how difficult it can be. What really gets me, though, is when advocacy groups fall into this narrative as well. Take for example The Human Rights Campaign. This is an advocacy group that works for equal rights for the LGBT community. This is a screenshot of their website:

This is another image HRC used to call for support for Mr. Collins. 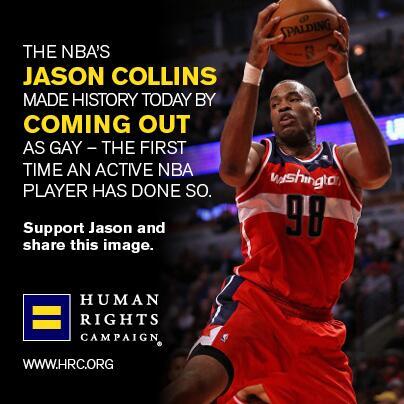 Maybe you’re wondering what my problem is. Well, I have a problem with double standards. A few weeks ago, WNBA star Brittney Griner came out, and there was barely a hiccup of attention. The New York Times noted as much in the aptly titled Female Star Comes Out as Gay, and Sports World Shrugs. Jim Buzinski, of Out Sports, explained that there was a reason for that. It’s because Griner is a woman. He then adds:

“Can you imagine if it was a man who did the exact same thing? Everyone’s head would have exploded.”

That’s exactly what happened. Everyone’s head exploded, including those of the folks at HRC. Their acknowledgement of Griner’s coming out was basically a blog post. Where’s the call to share her image in support of her decision? HRC didn’t create one. Instead, they shared a link to the aforementioned blog post on their Facebook page. That was it.

Do we really believe that we can “dismantle the master’s house” by “using the master’s tools”*? I don’t. It takes more than that. It takes a profound willingness to alter the prevailing discourse, and that includes refusing to perpetuate the  sexist double standard that undervalues women sports, while overvaluing male variants of the same sport.

Brittney Griner and other female athletes should get the same consideration and support as that given to Mr. Collins. That acknowledges their decisions, which are just as courageous and deserving of attention as Mr. Collins’.

*The original quote, from Audre Lorde is “For the marter’s tools will never dismantle the master’s house. They may allow us temporarily to beat him at his own game, but they will never enable us to bring about genuine change.”