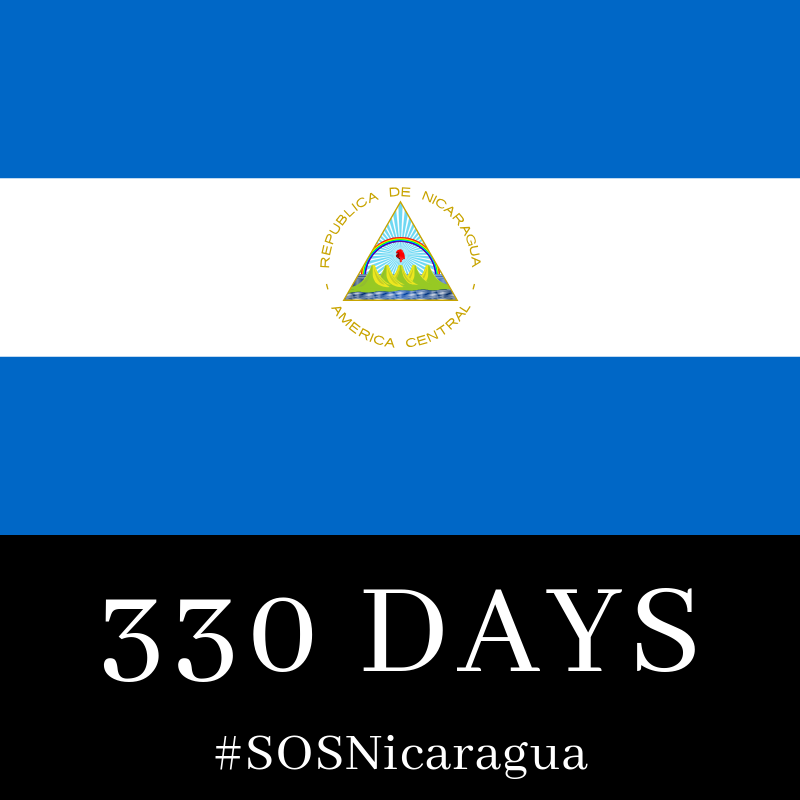 After the Alianza and the OrMu negotiation teams issued a joint statement announcing a rekindled negotiation, the Alianza retreated into mutism, that is, with the exception of Mario Arana, the president of the American Nicaraguan Chamber of Commerce (AMCHAM). Mr. Arana can’t seem to stop tweeting.

Mr. Arana is an economist and a former public official at the rank of minister. He is also a man with a very bad Twitter handle, that is, for someone who is negotiating one of the most consequential agreements since the Sapoa cease fire of 1988.

Indeed, how could you not want to trust someone who tweets from the account @marioaranasevil? That, alone, should inspire all kinds of confidence.

Once the joint statement was made public, Mr. Arana started answering questions via Twitter. It is not clear whether he acted as a spokesperson for the embattled Alianza, or if he was just going rogue and acting as the self-appointed dispenser of information. What is clear is that, in the absence of a formal press conference, or even one of those polished little videos that the Alianza Civica is so adept at publishing, Mr. Arana is the only person still in these negotiations that is talking, though he probably shouldn’t.

Mr. Arana’s first tweet came at around 10 pm, on Wednesday night. He responded to Carlos Fernando Chamorro’s criticism about the Alianza’s lack of transparency and willingness to accept something less than “conclusive signs” of good faith. To this, Mr. Arana responded, “There’s more to it, Carlos Fernando”.  He indicated then that “confirming the OAS as a guarantor [for process of release of prisoners] required an approved plan. We’ll work that out in two days, and there will be a commission working to free everyone, and working on the agenda.”

Mr. Arana perhaps hoped that this response would suffice. After all, he addressed it directly to one of the most popular and well-respected journalists in the country, a man with a tremendous following. However, about an hour later, Arana tweeted again, unprompted. This time, he said, “It’s impossible to ignore everyone’s reaction, but we haven’t loss sight of the main goals or lost our minds. Freedom for prisoners; OAS as guarantor, and early elections. We have agreed to push forward on the first two issues at the negotiation, in two days. Trust”

This tweet had over five hundred comments and questions, though Mr. Arana only interacted with a handful of people, including journalist Maynor Salazar, of Confidencial, twitter user @LaDetective007, and activist Yaser Morazan.

Maynor Salazar tweeted this to Arana: “Five days ago, you were asking (students included) for freedom for political prisoners. Today, you (without the students) accept excarcelation, which is not the same thing as freedom. By deciding to negotiate, you lose a lot of credibility and it is very hard to get it back.”

Arana’s response highlighted what he believes to be the biggest achievement the Alianza accomplished during private negotiations at the Nunciature, the OAS agreed to participate as a guarantor. “They want a plan for liberation of all prisoners. We’ll solve this issue in the next two days. In addition, there will be a joint work group. Then, we’ll deal with other issues.”

Salazar pressed on. He wrote “Nicaragua asks for transparency. You have to explain what this liberation plan entails. You also have to state what the dictatorship wants in exchange. You must clarify whether this will be liberation or excarcelation.” To this, Arana simply responded “we’re headed in that direction.”

I have no idea.

Next, @LaDetective007 had one question for Arana, “How can we trust [the Alianza] when the European Union and the OAS have asked for the liberation of all political hostages and […] the dictator continues kidnapping people. He has to stop kidnapping. He “frees” 100 and kidnaps 200. That’s not right. Open your eyes.”

Mr. Arana dismissed this concern succinctly, by saying that “it’s an issue to be solved with early elections.” In other words, Mr. Arana admitted that the Alianza can’t stop the dictator from violating human rights, and apparently neither can anyone else. That is up to the voters, who have the power to elect a different president, once there’s an election. Then, Arana repeated that the OAS wanted a plan, and that’s what “we’re working on right now.”

Another exchange Mr. Arana had was with activst Yaser Morazan, who questioned him for asking Nicaraguans to “trust”

Morazan: Trust people who meet without consulting their own membership? without communicating, informing, being transparent, or being representative, without anything like that? It’s not enough to look as though you’re good. You have to be good, and democracy in decision-making must be respected.

Arana: Opportunities come and you take them. Our mandate was to achieve the liberation of all political prisoners, and to have the OAS as guarantor. That is where we are going.

Again, Mr. Arana dismissed the crux of the criticism. The Alianza struck while the iron was hot, so to speak, and in that case, why bother consulting the membership? After all, releasing prisoners is point number one on the Alianza’s self-declared mandate, which was published on February 22. The coalition committed themselves to “(1) Liberation of political prisoners and the reestablishment of freedoms, rights, and guarantees established in the Constitution; (2) Electoral reforms that guarantee fair, free, and transparent elections; and (3) Justice.”

If Mr. Arana’s exchange with Yaser Morazan dismisses the lack of transparency criticism again, it is his exchange with user @soyguardabarra1 that has raised some serious doubts about the Alianza’s commitment to political prisoner liberation. User @soyguardabarra1 posted a follow up question to Carlos Fernando Chamorro’s critique, wanting to know why charges against political prisoners weren’t simply wiped away by decree.

soyguardabarranco: “[…] We want to know why charges can’t simply be nullified through an decree. That would be good. [Former Supreme Court Justice] Solis says it clearly [in his letter]. You are very ambiguous and you omit information. You don’t learn.

Arana: that will be part of the agreements we will reach in the next two days. We have to work on the details. Not all cases can be nullified that easily. We have seen case files. There cannot be any impunity on any side. Eventually, there must be a balance.

Rafael Solis, the former Supreme Court Justice who resigned in protest in January, wrote a lengthy analysis about the negotiations between the Alianza and OrMu. About political prisoners, Solis stated “the freedom for political prisoners should be achieved through the nullification of all trials, because they really are null and void.” Solis also stressed the need for national and international guarantors “to ensure that the prisoners will be absolutely free, and that they will not be recaptured later […]. It must be established that the National Police cannot detain any of these 700 individuals who are to be released, unless they commit a common crime in the future. It must also be established that they will not be under police surveillance.”

Mr. Solis’ letter is very clear on the invalidity of the trials staged against many political prisoners  — there are many others who have yet to see the inside of a courtroom, and some that haven’t even been charged with anything at all. He is not the first to point out the serious irregularities committed against these citizens. The GIEI (Group of Independent Experts) characterized the actions of the criminal justice system as part of a “scheme of human rights violations observed in Nicaragua”:

These judicial processes improperly charged students, rural and social leaders with crimes such as terrorism and organized crime, among others, in order to persecute and punish legitimate acts of opposition against the government. […] All these processes reveal serious violations of personal liberty, including arbitrary detention orders and the generalized use of pre-trail detention, in blatant disrespect of the necessary motivation and lack of compliance regarding the judicial control over any deprivation of liberty. Pre-trial detention has been used without adequate consideration of the charges imposed on the defendants; or else considered evidence that did not comply with standards od legality or relevance.

Moreover, the public nature of these trials and the right to an adequate defense have notoriously been restricted without proper justification [in sum, the judicial processes instituted against individuals accused of infringing the law during the protests do not comply with minimum standards of due process.

In spite of these expert opinions, Mario Arana publicly stated that there are cases that cannot be nullified, based on the case files, produced in processes that don’t meet minimal international standards of justice. If that wasn’t bad enough, Arana conveniently glosses over the fact that no police officers, commanders, or paramilitaries have been charged with any crimes. According to the GIEI, only nine cases of violent death have been prosecuted, and six of these cases involve victims that were somehow connected to the dictatorship or the sandinista party.

The GIEI notes that 100 out of 109 violent deaths have not even been judicially prosecuted, that is to say, the remain in impunity. In those nine cases where there has been a judicial process, six relate to victims who are somehow allied with the State of Nicaragua or the governing political party. There have been no indictments against members of State security forces, although all evidence points to their criminal responsibility.

Mr. Arana’s explanations are unsatisfactory to say the least, and downright troubling, particularly in the matter of political prisoners who have demanded not to be made into pawns in the negotiations. Unfortunately, that is what they have become, and Mr. Arana’s comments suggest that there could be people who won’t be released. Further compounding the mess, Mr. Arana then had a short exchange with Dora Maria Tellez, aka. Comandante Dos. Tellez commented on the timeline for releasing the prisoners, noting that it would be a lengthy process:

Tellez: “this will be a process that will take months, because Ortega needs to have hostages while he negotiates amnesty and impunity. The liberation of the prisoners must be immediate and total, without conditions.”

Arana: I never said anything about months, but there should be a plan. There are lists that must be brought into harmony. I suppose there should be some kind of orderly process, since there are different types of legal situations, whether we like it or not. That’s the way it is.

Rafael Solis, who was an advisor during the peace process of the early 1990s, noted that the prisoner release and combatant disarmament process was carried out during the final year of Daniel Ortega’s presidency in 1989, and went well into the first year of Violeta Chamorro’s mandate. Though clearly that process involved many more prisoners and armed combatants, it is fair to day that we’re looking at months of work, particularly if the OrMu administration decides to stall.

There has been controversy due to a technical fault of mine, since I’m not a lawyer. I misused the term case file. I believe that all cases against political prisoners are null and void. I was trying to talk about the fact that we need a process to achieve this goal. Here we have political prisoners who have been sentenced, others who are in jail without process, others are being processed, other have been liberated without charges to house arrest, and some people who should be in jail from the other side, are not. There are all kinds of cases, plus to lists with disparate numbers that must be harmonized.

In sum, Mario Arana shouldn’t tweet because he doesn’t understand what he’s talking about, by his own admission.

The Alianza should abide by its commitment to the Nicaraguan people, whom they told that “Nicaragua deserves a serious, transparent, and concrete dialogue.” Be transparent now. Hold a press conference; answer questions if at all possible, without giving away to much of your negotiating position.