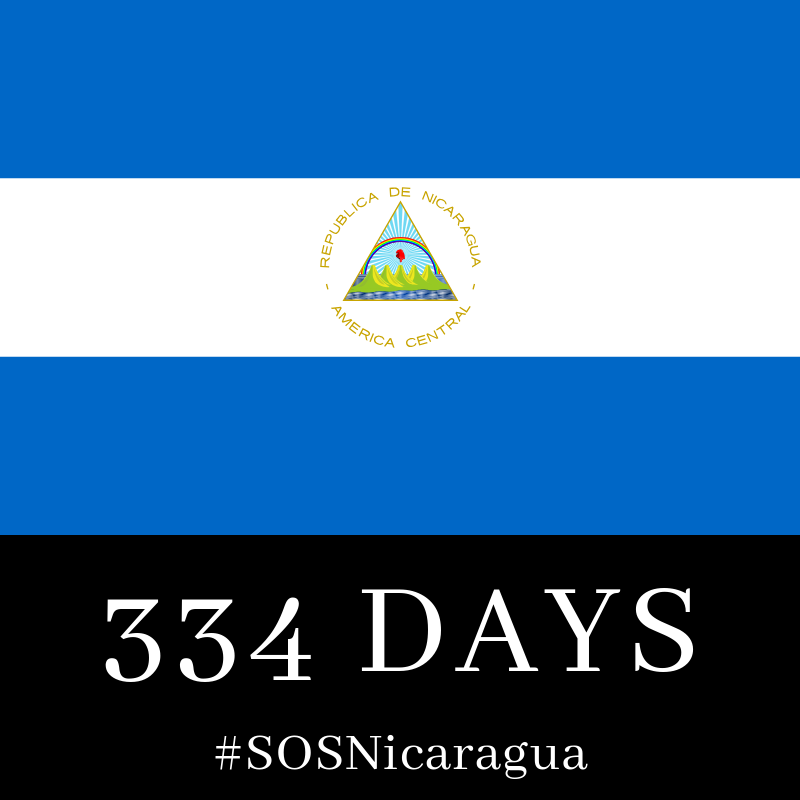 After the #ALaCalle Protest resulted in the arbitrary detentions of some 160 protesters on Saturday, the OrMu negotiating team issued a statement, chastising the Alianza Civica for going to the march. According to the government side, such act was “inconceivable, contradictory, and unheard of”

[the Alianza negotiators] participated in a provocation and alteration of public order, against the security of Nicaraguan families, who have the right to tranquility and peace.

The government side added that they “expect seriousness and responsibility, and a demonstration of sincere commitment to talk and reach a consensus on positive agreements for Nicaragua.”

On Saturday, Max Jerez and Azahalea Solis were detained and taken to the new Chipote.  Jerez represents the Coalicion Universitaria as a proprietary member of the negotiating team, while Solis is the alternate member for Carlos Tunnerman.  Both were released several hours later, along with the rest of the detainees. No charges were filed.

The Alianza also issued a statement condemning Saturday’s actions against #ALaCalle protesters, “who were peacefully exercising their constitutional right to public protest.” The statement was read by Carlos Tunnerman, who added during the Q&A session, that the police’s role was to provide security to protesters. “The police is a civilian security organization, whose constitutional role is to safeguard citizens. That is what should be expected. Instead, they did the opposite. […] The police cannot deny a constitutional right.”

Given Saturday’s events and the government’s unwillingness to release the over 700 political prisoners, the Alianza described the negotiations as stalled. “To date, the national dialogue has not produced the results that most of our fellow citizens legitimately expect. Their frustration is our own, and we fully understand and share it.”

The statement placed the future of the negotiations in the government’s court. “It is up to the government to release [the political prisoners], to respect their rights, and to cease the repression.”

The statement also thanked the Nuncio, for “his important contribution and support to the people in negotiating the release of over 160 kidnapped [individuals] and ensuring safe passage for those who were under police siege in different places around the [Managua].”

The Alianza is the second organization to publicly support the nuncio’s diplomatic good offices today. Earlier, the Comite Pro Liberacion de Presos Politicos asked for attacks against the Vatican ambassador to cease.

During the press conference, which was open to all media, members of the OrMu propaganda organizations baited the Alianza negotiators. One question insinuated that paid provocateurs, rather than citizens in protest, had been mixed in with the people. The questioner indicated that there was “video showing those people getting paid by someone in a gray truck.” In response, Jose Pallais invited the questioner “to join the government’s negotiating team, as you would be representing the true feelings and ideology of the party you belong to.”

The government negotiators have yet to hold an open press conference and answer questions.

Two days after the police cracked down on the #ALaCalle protesters, there was another rally inside the Central American University (UCA). The protest marks 11 months since the start of the crisis.

UCA’s campus was surrounded by police units, who did not enter the grounds.

Inside, students and other citizens demanded the release of political prisoners.

Protesters could be heard chanting “You must study, so you don’t end up having to be a police officer.”

Protesters also brought chairs, in reference to a video shot on Saturday, showing a protester whacking a police officer with a folding chair. Since then, the folding chair has become a meme and symbol of resistance.

In other news, Rosario Murillo announced the graduation of 462 new police officers. She said that these new recruits “follow on the legacy of officer Zayra Julissa Lopez, who was assassinated by the Dark Forces that wreaked terror in Nicaragua.”