Nicaraguans Commemorate Easter in the Shadow of Ortega-Murillo Police State. 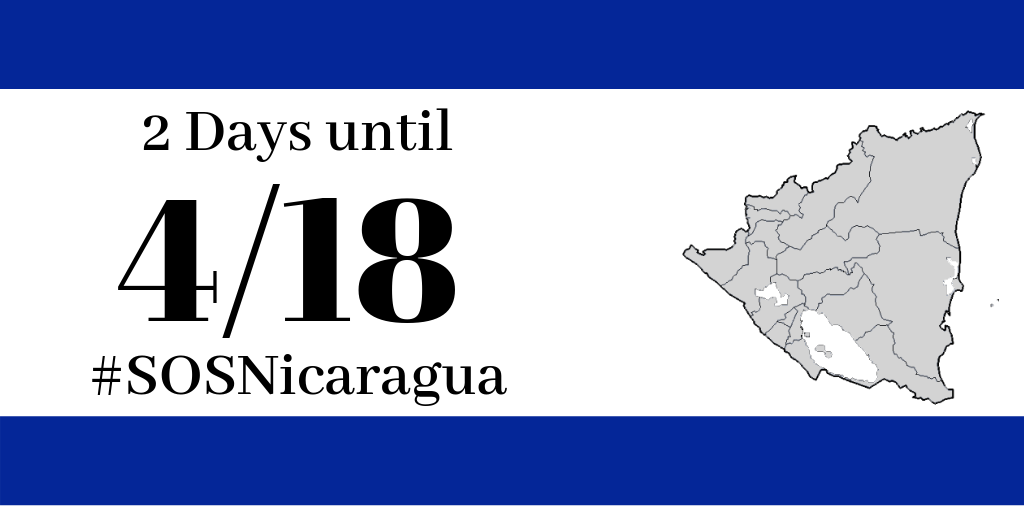 On April 11, Police Chief Francisco Díaz ceremoniously gave 81 new police vehicles to his subordinates. “These 81 transportation units will strengthen citizen security in Managua”, said Díaz. He then thanked Daniel Ortega, who not only is president, but also “Supreme Chief of the National Police.”

Ortega became supreme chief after a full revision of the 1996 police law placed the president at the top of police hierarchy. Law 872 was approved in 2014 by a national assembly controlled by the Sandinista party. This law created the office of the Supreme Chief, giving it the power to “utilize” police human and material resources, name commanding officers and other high ranking posts, approve budgets, and set state policies in matters of security, among other faculties.

As the crisis in Nicaragua nears its first year, the police are fully deployed to ensure the safety of the dictatorship.

A police state is political entity in which a government uses police forces to control what people can and cannot do, often through the arbitrary exercise of power. Police actions within a police state, therefore, go beyond their lawful duties of protecting and serving citizens. Rather, the police becomes an active agent of state repression and control.

Nicaraguan law establishes the Recurso de Amparo, a constitutional provision that gives citizens the right to appeal against “any action or commission by any official, authority, or agent that violates or tries to violate the rights and guarantees established in the Political Constitution.” However, no redress petitions have been filed against the police, thus far, though not for lack of cause.

Indeed, the police violates constitutional rights daily, and sometimes in writing. For example, today the institution forbade Unidad Azul y Blanco (UNAB) from marching, because they “did not comply with the established requisites,” namely:

The people who communicated their decision to mobilize publicly […] were involved in the serious alterations to public order that happened over the past few weekends in various malls of Managua, whereby several people were wounded and commerce and recreation were affected.

It is worth noting that not one person has been charged with any crimes. That includes the man who shot at a group of protesters at Metrocentro on March 30. The shooter is a card-carrying member of the FSLN.

Jesùs Tefel, a member of the political council for UNAB, stated that the organization had not requested any permit, as the Nicaraguan Constitution grants the right to assembly without one. Indeed, article 53 of the Constitution enshrines the “right to peaceful assembly without prior permission.”

Therefore, UNAB has decided to go forth anyway. They will march on April 17, at 2 pm, in Managua.

In addition, UNAB called on the international community to tell “the government of Nicaragua not to repress the march and to respect the fundamental and non-renounceable right toe free expression and mobilization.”

UNAB’s statement points out, yet again, that the Ortega-Murillo administration has “shown no political will”. In March administration’s negotiators signed two agreements regarding political prisoners and restoration and respect for constitutional rights and guarantees. To date, not a single political prisoner has been freed; they have been excarcerated to house arrest, often at convenient times. Indeed, one group of 50 prisoners was transferred to house arrest on the same day that the OAS Permanent Council held a briefing on the Nicaraguan crisis.

Prisoner excarcelations are lip service to an agreement that binds the Ortega-Murillo administration to “the definitive release” of all political prisoners within 90 days.

Today, as the first anniversary of the protests nears, the Ortega-Murillo administration announced the excarcelation of 636 prisoners, as part of the government’s commemoration of Easter. “These 636 individuals will be received by their families at various penitentiaries throughout the country, where they will participate religious services, to give thanks to God.”

Unlike prior excarcelations, the Interior Ministry did not publish a list of the prisoners who were granted house arrest.

Preliminary reports indicate that most of 636 released were common prisoners, rather than political. The lowest estimate is 13, and the highest places the number at 36.

In a joint press conference, the Alianza Civica and the Comité Pro Liberación de Presos Políticos indicated that the Ortega-Murillo administration did not consider the people excarcelated today as political prisoners.

In addition, the families received word that their relatives would be granted a presidential pardon, though that was not what the administration announced today. The Comité Pro Liberación de Presos Políticos objects to presidential pardons, as those imply that political prisoners are guilty of a crime, rather than the victims of government overreach.

“We represent political prisoners, who are in there for exercising their right to free mobilization. We are not involved with common inmates, but the government does not want to recognize these prisoners as political prisoners,” said a spokesperson for the Comité Pro Liberación de Presos Políticos.

The crisis will reach the one year mark on Thursday, with no end in sight.