The Permanent Council of the Organization of American States met this morning to consider the the situation/status of democracy in Nicaragua, as part of the process towards the application of Article 20 of the Democratic Charter which could lead to Nicaragua’s suspension from the OAS.

During the session, five presenters laid out the legal case against the Ortega-Murillo dictatorship, arguing that democratic order in Nicaragua had begun eroding since the early 2000s, when a reform of the electoral law lowered the required threshold for winning the presidency in a first round, from 45% to 40%, or even 35% in cases in which the party earning the majority of votes surpassed its nearest competitor by at least five points. According to Harold Rocha, who spoke on behalf of the Nicaraguan-American Center for Democracy, these reforms where the beginning of the end of democratic rule in the Central American nation. 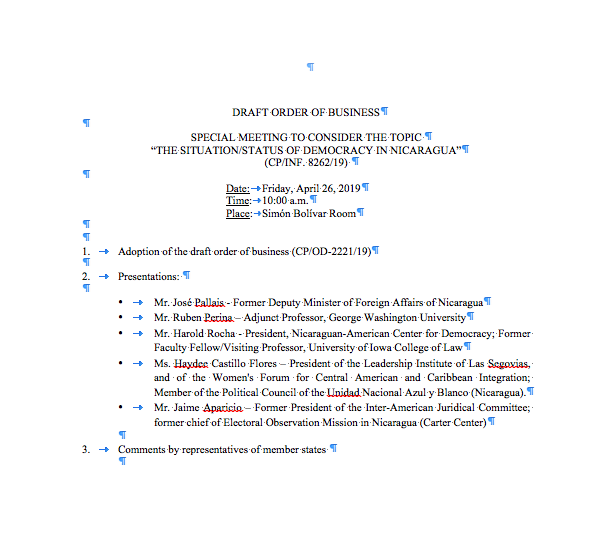 Today’s presenters argued that democratic order in Nicaragua was practically non-existent, as a result of years of systematic consolidation of power around the executive branch, lead by Daniel Ortega since 2007.

Article 3 of the Democratic Charter lays out the “essential elements of a representative democracy”, which include “respect for human rights and fundamental freedoms, access to and the exercise of power in accordance with the rule of law, the holding of periodic, free, and fair elections based on secret balloting and universal suffrage as an expression of the sovereignty of the people, the pluralistic system of political parties and organizations, and the separation of powers and independence of the branches of government.”

Speaking for the Alianza Cívica, José Pallais was the first to explain that Nicaragua was no longer a democracy. “We have been suffering through a process of constant destruction of representative democracy” in violation of the Democratic Charter, argued Pallais.

“At one point, in 2009, even the constitution was declared to be unconstitutional,” to allow the reelection of Daniel Ortega and open the door to “dynastic succession.” As a result, the government led by Daniel Ortega.

Ortega’s government, said Pallais, lacked legitimacy from the start, as it was built upon an edifice of violations of constitutional norms and electoral fraud.

As for Article 4, all presenters argued that the Ortega-Murillo administration lacked transparency, undermined freedom of expression, and failed to uphold the rule of law. Consequently, argued Haydee Castillo, “this government broke each one of the essential elements of democracy.”

The Executive Controls Everything.

Presenters also spoke of the erosion of the principle of separation of powers, which is also covered by Article 3 of the Charter. According to Ruben Perina, a professor at George Washington University, there is no doubt that the different branches of government are no longer independent. Perina argued that “The power of the Ortega-Murillo duo is unchecked, which is a violation of any constitution.”

Harold Rocha coincided with Perina’s assessment, adding that the process whereby Ortega consolidated his power could be traced all the way back to the Alemán-Ortega Pact of the early 2000s, which opened the door to Ortega’s eventual reelection in 2007. Since then, said Rocha, Ortega dismantled political plurality and “built a hegemonic party.” Ortega has established a government by decree and secured his personal dominance over the Supreme Electoral Council, the courts, the military, and the police, in order to guarantee political power for himself and his family. However, “there is no such thing as a human right to reelection,” Rocha stated.

Feminist Activists Sounded the Alarm Early on, but no one Listened.

Haydée Castillo told the Permanent Council that “Women had been warning about the dictatorial entrenchment in Nicaragua for years […], but no one listened to us until blood was shed.”

Castillo is a member of the Political Council of UNAB. She echoed what prior presenters had laid out as evidence of a systematic violation of the Democratic Charter. According to Castillo, though, Ortega had not just violated Articles 3 and 4, but also Articles, 1, 6, 13, and 28.

“Nicaragua, as any country, has the right to a democracy, and to have a government that fulfills its obligation to promote and defend it,” said Castillo, in direct reference to Article 1 of the Charter.

Castillo also indicated that the government had effectively closed up all forms of participation in “state affairs.” The brand of “direct democracy” that the Ortega-Murillo administration imposed on Nicaragua has “asphyxiated all spaces and the dialogue between society and the state.”

In regards to Article 13, Castillo argued that the so-called consensus model, which privileged Nicaraguan large capital, led to an indiscriminate exploitation of natural resources, in detriment of the rights of of many Nicaraguans, including indigenous communities.

“They invade ancestral lands and strip away the rights of indigenous communities through repression,” as a consequence of the government’s “unconstitutional concession” of Nicaraguan land to a Chinese company, to “build a canal”. In addition, now that private capital is no longer cooperating, the Ortega-Murillo dictatorship has gone after them too, through reforms and laws that “squeezes what little people have left.”

Women’s rights are not safe in Nicaragua, stated Castillo, as Daniel Ortega, with the support of the Church, big capital, and other groups, took away women’s right to therapeutic abortions and undermined laws that protected women against domestic violence. Furthermore, Ortega has gone after women’s and feminist organizations, in retaliation for their support for Zoilamerica Narváez, after she denounced her stepfather, Daniel Ortega, for sexual assault, rape, and sexual harassment. “Just like Nicaragua [is now], she was abused by his power [then].”

International Community has the Obligation to Intervene in Nicaragua.

In spite of the Ortega-Murillo administration’s claims that any kind of foreign action constitutes undue interference in domestic affairs, today’s panelists argued that the international community had the duty to step in.

“The principle of non-intervention has lost its traditional meaning”, argued Rubén Perina, stating that once nations signed international instruments like the Democratic Charter and others, they ceded part of their sovereignty in order to become members of an international community of nations. “Once a state commits itself to the defense of human rights, they cede absolute sovereignty”

Concurring with Perina, Jaime Aparicio argued that a defense of democracy is not “interference.” It is a commitment to democratic principles “incorporated in many constitutions.”

“It is necessary to intervene when a state becomes authoritarian, and, to a certain degree, criminal.”

IACHR Documents New Forms of Repression and of Protest

The Inter American Commission for Human Rights also presented its position in regards to Nicaragua. Claudia Pulido spoke for the Commission, reminding the assembled representatives and guests that the IACHR had already documented a series of acts that “can be considered crimes against humanity.”

Pulido indicated that the state was now engaging in new forms of repression. Namely, rather than jailing protesters, the police engages in catch and release. People are detained for short periods of time, abused, and then released without ever seeing the inside of a police station. “Arbitrary detentions” are a deterrent to the return of exiled Nicaraguans, said Pulido.

However, Pulido also noted that the Nicaraguan people continue engaging in acts of civil protest, including express picketing, sit ins, and other actions, in an attempt to bypass the police’s occupation of “all public spaces.”

Representatives from Venezuela, the United States, Canada, Chile, and Brazil all spoke against the Nicaraguan government, with Venezuela officially withdrawing its support for the Nicaraguan dictatorship. This was announced by the new Venezuelan Ambassador to the OAS, Gustavo Tarré.

Tarré was designated by Venezuela’s congressional leader, Juan Guado, as Permanent Representative. He characterized the Maduro government’s support for Daniel Ortega as “shameful,” and requested the application of the Democratic Charter.

Tarré added that there were painful similarities between the current crisis in Nicaragua and the situation in Venezuela.

“That is not a coincidence,” he said. “Those are judicial farces that aim to consolidate dictatorial power.”

In similar vein, Alexis Ludwig, Deputy Chief of Mission for the United States, argued that Ortega utilized the “judicial branch to cover up crimes, rather than investigate them.” Ludwig said that the Ortega-Murillo administration showed “wanton disregard for international mechanisms”, and had shown no signs of its will to resolve the crisis. “Words and agreements mean nothing without clear action, changed behavior, and concrete results,” concluded the envoy.

Nicaragua Responds by Attacking the IACHR and Reading a Statement Twice

Nicaragua’s Deputy Foreign Minister, Valdrack Jaentschke, delivered the Ortega-Murillo’s response to the Permanent Council. Jaentschke characterized the session as “highly irregular”, accused presenters of “expressing personal opinions,” and pointed the finger at the IACHR, which he described as “irresponsible and politicized.”

“It is time to return to the real world,” he said, before launching into a sundry list of all the “accomplishments” the government had achieved at the national dialogue. These include the negotiation roadmap, the agenda for negotiations, the Agreement to Strengthen Citizen Rights and Guarantees, the Agreement on the Release of Detainees, and a repatriation proposal that was rejected by the Alianza Cívica.

Jaentschke concluded by “reaffirming” his government’s “Political Will to reach Consensus and continue to comply with the Agreements that have already been made”.

This exact statement was read into the record twice.

Secretary Almagro: “There is no undue intervention”

OAS Secretary Luis Almagro summarized the main arguments for the application of Article 20 of the Democratic Charter. To begin, Article 20 does not require prior consent from the state where a serious breach of constitutional and democratic order has occurred, which means that the Secretary General and/or any state can initiate the process. Almagro pointed out that Nicaragua had agreed to these terms, by signing the charter, which rendered any claims of “undue intervention” meaningless.

In addition, Almagro said that he expected signed negotiation agreements to be fulfilled “imminently”.

“There is definitely a lot of institutionally that must be rebuilt in Nicaragua,” he concluded.

All agreements must be fulfilled imminently in #Nicaragua: free political prisoners; return of Nicaraguans in exile; electoral reforms; return of #MESENI of the @CIDH; respect for fundamental freedoms, including of expression and protest: @Almagro_OEA2015 pic.twitter.com/lralzw520t

The next step in the application of the Democratic Charter would be to call for a special session of the OAS General Assembly. This step could be taken if all other efforts, including the current negotiations in Managua, fail.

Negotiations between the Ortega-Murillo administration and the Alianza Cívica are stalled, due to the government’s lack of compliance with the agreements signed in March.

To date, no political prisoners have been liberated, and civil liberties and rights have yet to be restored.