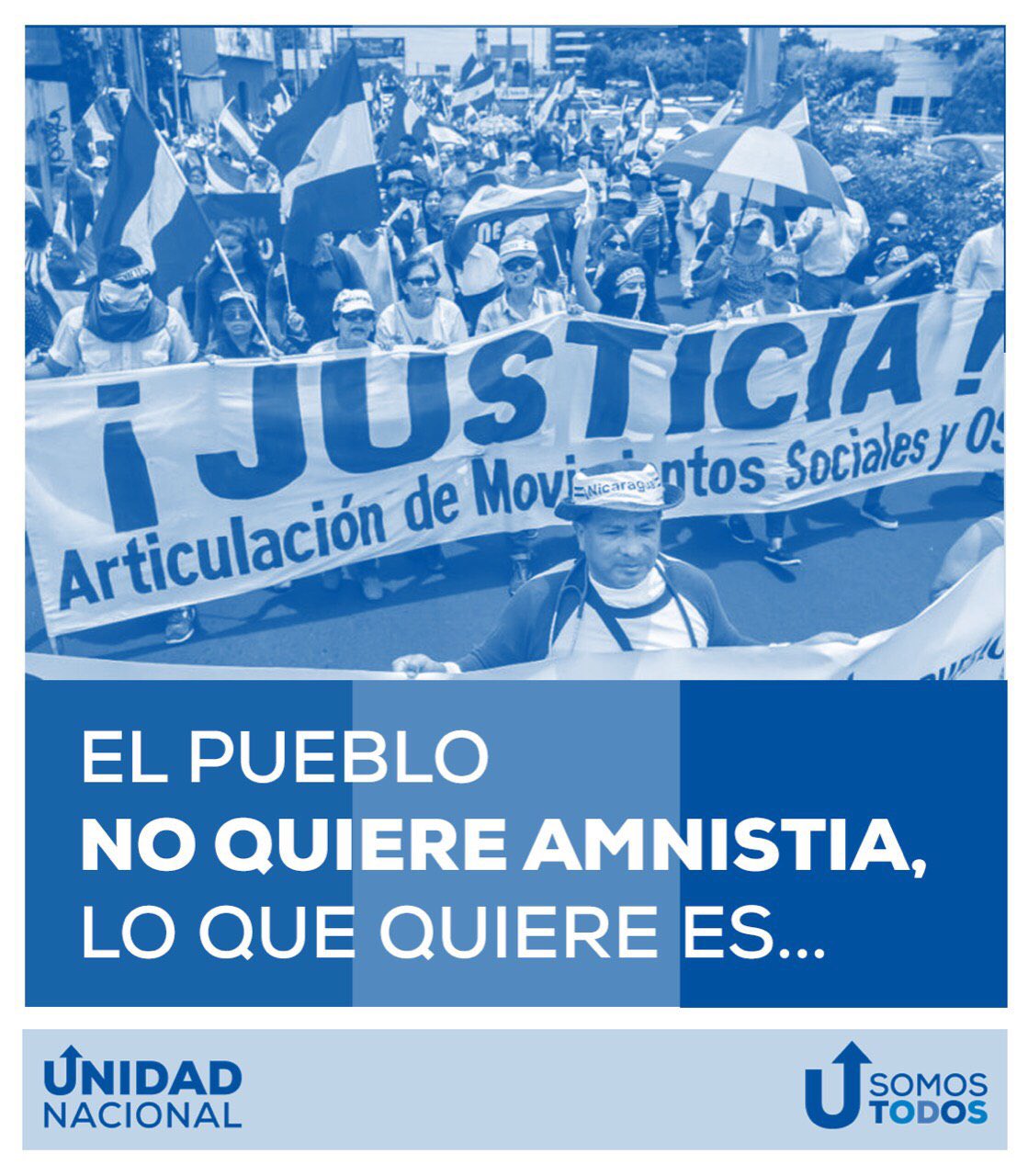 The long-expected Amnesty Law has finally made it to the Nicaraguan National Assembly. This afternoon, the Sandinista proposal was leaked by the local independent press. The bill includes the signatures of seemingly every Sandinista legislator; it is expected pass on a party line vote on June 8.

The bill has not yet been posted on SELEY, the official legislative tracking system of the Nicaraguan Assembly, but the draft is consistent in language and content with what Nicaraguans have come to expect from the Ortega-Murillo government.

What the Amnesty Law says.

Since 1985, the State of Nicaragua has issued fourteen amnesty decrees. The Sandinista legislators argue that these laws supported “reconciliation and peace among Nicaraguan families.” The phrasing is typical of all government statements coming from El Carmen, the Ortega-Murillo family compound and de-facto presidential residence.

“All efforts carried out so far support the need for a legal instrument [to ensure] stability, peace, and economic restoration,” says the bill. The proponents argue, therefore, that an amnesty would fulfill these goals, because it “implies pardon for the acts that were committed, without undermining the search for truth, reparation, remembering, and non-repetition.”

The law includes four articles. Article one grants a “broad amnesty to all persons that have participated in the events that occurred across the national territory, between April 18 of 2018 and the date when the present law goes into effect.” Article 1 then specifies who will be granted amnesty as follows:

Amnesty is granted to persons who have not been investigated, to those who are in the process of being investigated, to those who are in court to determine their responsibility, and to those who are serving their sentences. Therefore, authorities will not initiate investigative processes, will close initiated administrative processes as well as criminal proceedings and the execution of sentences once the law goes into effect. In similar fashion, the persons who are deprived of liberty at the moment in which this law goes into effect must be released immediately.

Article 2 defines the acts covered by the amnesty as “all political crimes and connected common crimes”. However, the article excludes crimes that are “regulated by international treaties that Nicaragua is a party to.” The wording was probably included as lip service to current international obligations, as Nicaragua is party to the following treaties:

However, the article can also be interpreted as a way to deny the release of specific political prisoners that have been charged with acts of terrorism, as the State of Nicaragua is also party to agreements governing this matter, including the International Convention for the Suppression of the Financing of Terrorism.

Article 3  mandates beneficiaries to “abstain” from further action that “lead to repeated conduct that would generate the crimes contemplated in this law.” Non compliance will result in the “revocation” of the amnesty.

Finally, Article 4 establishes that the law will enter into effect as soon as it is published in the Gaceta, the official legislative record.

The Ortega-Murillo amnesty is a problematic proposal for several reasons. First, it punishes “political crimes”, without defining what the term means. The Nicaraguan Penal Code includes the following categories of crimes: delitos graves (felonies), delitos menos graves (less serious crimes; somewhere between a felony and a misdemeanor), and faltas (misdemeanors). Political crimes are not covered by the current Penal Code. However, actions that the Ortega-Murillo government would consider “political crimes” are vaguely defined in the Ley Contra el Lavado de Activos, el Financiamiento al Terrorismo y el Financiamiento a la Proliferación de Armas de Destrucción Masiva, the Antiterrorism Law that the Ortega-Murillo regime passed in July of 2018.

The antiterrorism law was heavily criticized as an attempt to punish the opposition and silence dissent, through a vague definition of terrorism that the Ortega-Murillo government could apply at will, especially since Daniel Ortega and Rosario Murillo use the word terrorism to describe anyone who has opposed their rule.

Secondly, the amnesty law exchanges the release of political prisoners for a blanket pardon to Ortega-Murillo public officials at all levels, police officers, and para-police groups and individuals. With a provision to stop authorities from “investigating” any activity that hasn’t been looked into, the law ensures that those who committed crimes against humanity will not be punished under the current regime.

Third, article three’s mandate to “abstain” from activities that people were granted amnesty means that political prisoners who receive amnesty cannot participate in any action that the government considers a “political crime”. Since political crimes are not defined properly, it is up to the Ortega-Murillo officials to decide what is or isn’t a crime that can get one’s amnesty revoked.

Finally, the law does not address the status of organizations that were stripped of their legal personhood, such as CISAS, IEEPP, and Fundación del Río, or of Canal 100%Noticias and Confidencial, the two media organizations that had their assets seized in December, as the law only consider the actions of individuals, not those of the state itself, even though the state has ordered and condoned the repression.

Many Nicaraguans have rejected the Amnesty Law, even before the text became known. It was expected that the law was going to be a blanket pardon, and now that the text is public, the rejection was justified. Prominent Ortega-Murillo critics have now taken to social media to speak agains the law.

Journalist Carlos Fernando Chamorro indicates that the “unilateral amnesty protects the perpetrators of the repression.”

Azahalea Solis, of the Alianza Cívica, called for the “definitive and full liberation of all political prisoners”, and rejected the “auto-amnesty that the regime wants to give itself.”

Dora María Téllez, the erstwhile Sandinista leader, also characterized the law as an pardon for “Ortega and his repressors, who committed crimes against an unarmed people that protested civically.” Téllez also points out that “not a single political prisoner has asked for amnesty.”

Lawyer Yonarquí Martínez, who defends several political prisoners, stated her objection to the law because “it does not respect the will or the well-being of the people.” Martínez also announced she was preparing an appeal against the law, on the basis of unconstitutionality.

The status quo in Nicaragua makes passage of the law a foregone conclusion.