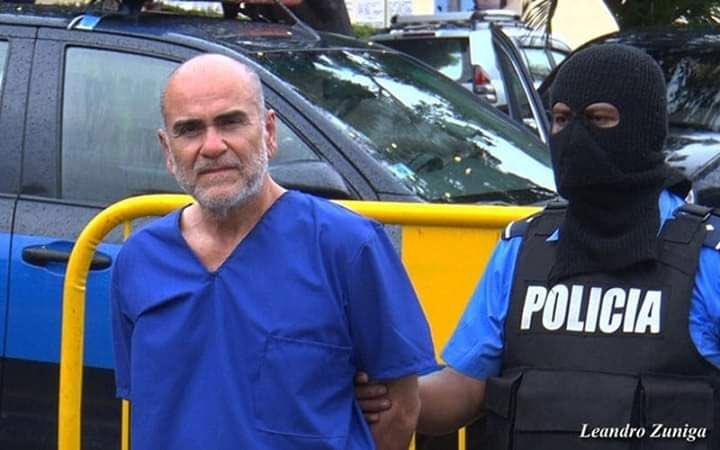 Political prisoner Eddy Montes was shot and killed yesterday by a guard at the Modelo Prison in Tipitapa, Nicaragua. The fifty-seven year old Montes was an American citizen. The circumstances of his death are under dispute, as the Ministry of the Interior (MIGOB) describes the actions of the unidentified guard as “self defense”, while prisoners indicate Montes died as a result of excessive force.

According to two press releases issued by the Ministry of the Interior (MIGOB), “Eddy Antonio was part of a group of prisoners who charged against penitentiary personnel at the security perimeter, struggling with one of the guards, with clear intentions of disarming him and to threaten the lives of the personnel. The guard acted in self defense and fired one shot, even though he was armed with an automatic rifle.”

Law 473, which regulates penitentiaries, sets limits to the ability to carry firearms inside prisons. Officers are not allowed to carry, except in case of “mutiny, kidnapping, escape, and the preservation of infrastructure.”

Unsurprisingly, MIGOB describes the incident that led to Montes’ death as a “serious alteration to order, within the penitentiary, caused by prisoners who have committed crimes against public order.” The entity also indicates that the prisoners have caused damages to the infrastructure of the penitentiary and attacked personnel. If that were the case, officers would have been acting within the scope of the law, in order to preserve the infrastructure of the Modelo. However, the swift disposal of the case follows a pattern already identified by the Group of Independent Experts of the OAS (GIEI), whereby deaths of protesters and/or bystanders are not properly investigated. GIEI’s report, issued in December, described how inquiries into these deaths were performed:

The inquiries into [..] violent deaths show serious deficiencies, such as the failure to conduct a crime scene investigation, or properly do so, the failure to perform autopsies, or autopsies that violate international standards on the subject, despite the obligation to carry out those procedures in order to clarify the events. They also failed to incorporate digital evidence, such as telephone or geolocation data. Despite the abundance of video evidence regarding these serious crimes, they have not been included as evidence in the trials, except in a very limited scope. Nor was ballistic evidence properly processed in all cases. The investigations have not been comprehensive or impartial. In conclusion, the GIEI considers that the State of Nicaragua has violated its obligation of due diligence regarding the investigation of the violent deaths that occurred from April 18th until May 30th, 2018.

Local and international media reporting on the story have remarked on the inconsistencies in the MIGOB statement. Journalist Tiffani Roberts, of Univision, for example, reported that there were several AK-47 shots fired. “There have been wounded carried out, and there’s speculation that they could be political prisoners,” tweeted Roberts, shortly after the news broke.

Another inconsistency involves the presence of the International Committee of the Red Cross (ICRC). According to MIGOB the incident that led to Montes death occurred while the the ICRC was on site at the Modelo. An anonymous source at the Modelo told Roberts that was not true, as the visit took place the previous day.

Though the ICRC field office did not explicitly deny that they had been at the penitentiary when Montes was shot, the organization confirmed that it had been carrying out out site visits this week. The carefully-worded statement suggests that the ICRC was not there when Montes was shot, but came afterwards to act as a mediator.

“The ICRC facilitated the evacuation of the wounded, who received medical attention from penitentiary medical staff. ICRC personnel also interviewed several detainees.” The ICRC also indicated that they will be at the penitentiary today, to continue its “visits”. No further details were provided.

Mr. Montes was charged with terrorism, obstruction of public services, aggravated robbery, and other serious crimes, allegedly committed during the attack on a police station in the city of Matagalpa.

This morning, more details trickled out of the Modelo. According to Yonarqui Martínez, lawyer for several political prisoners, there are at least seventeen wounded. Among them are Nairobi Olivas, Byron Estrada, Harvin Lesage, Vidal Canizales, Jonathan López, Victoria Obando, and Dillon Ramos.

Martínez also states that Mr. Montes was shot in the back, a claim most likely based on information provided by prisoners themselves, via letter.

The letter, signed 34 political prisoners, describes how the incident started. “Yesterday, Thursday May 16, at around 2:30 pm, a group of political prisoners were on the yard between galleries 17-1 and 17-2, playing a game in which they approached the perimeter fence. A guard began provoking them, telling them to move away or they will start using weapons, because they already wanted to. The boys answered bravely, and during the verbal exchange, the guard fired his AK-47”.

The letter adds that around 300 security personnel arrived on the scene after shots were fired. They “came upon the political prisoners, who started defending themselves as well as they could,” but were overpowered and pushed towards the building. Once inside, the guards continued firing their AK-47 and other firearms. They also attacked the prisoners with night sticks.

It was then that the shot that killed Eddy Montes was fired. “He was struck in the back. The boys came back out to help him, and they dragged him into the building, but he was dying within minutes.”

According to the prisoners, the attack ended when Warden Venancio Alaniz ordered the guards to stop because “the Red Cross was in the prison.”

A slightly different description of the incident circulated in a recording published by the Comité Pro Libertad de Presos Políticos, a civil society organization representing relatives of political prisoners¹. In the audio file, an unidentified prisoner says that the prisoners were inside their perimeter when an officer threatened a group of political inmates with death, pointing his gun at them. According to the witness, the guard had issued threats before, and the prisoners had already requested his transfer out of the unit.

“Mr. Eddy Montes, peacefully and without any weapons, because we don’t have weapons, asked that the officer be removed because he was threatening prisoners. In an instant, guards opened fire and shot him. The shot hit him in the pelvic region. He had an entry and exit wound. The shot was fired from an AK-47, and he was shot within our perimeter. We never breached our perimeter”

The prisoner goes on to describe how fellow prisoners tried to drag Mr. Montes to safety, but were unable to do so because “a rain of bullets started. They were shooting to kill, and we had to flee.” The guards chased after them into the prison. “They used tear gas and pepper spray, and they shot at us with AK’s and shot guns, to kill.” The prisoners were subdued, dragged outside, and beaten, while guards yelled out sandinista slogans. “They called themselves the ‘Son’s of Sandino’ and the ‘Pups of Daniel Ortega’.”

According to the prisoner, there are about a hundred political inmates who are wounded. “Forty of these individuals have severe wounds and fractures.”

The prisoner says that the only reason the attacked stopped was because of a “surprise” visit by the ICRC. “Venancio Alaniz came and told the guards that they needed to stop beating us for now, because the Red Cross was at the prison.”

Prisoners provided several photographs of the aftermath of the attack. The images show bullet casings, blood, and wounded prisoner, and have been published by several independent media, including Radio Corporación.

As of this writing, the Ortega-Murillo prison officials have not released any information about the condition of the prisoners and neither has the Red Cross.

The international reaction to the news so far has been mostly restrained but uniform in demanding a full investigation. For example, the United States embassy in Managua condemned the “use of lethal force” that led to Mr. Montes death and asked that the “tragic incident” be “fully investigated.”

The US Government condemns the use of lethal force against American Citizen Eddy Montes, a political prisoner detained in La Modelo Prison. Our sincere condolences to his family. The circumstances of this tragic incident should be fully investigated.

In Madrid, Minister for Foreign Affairs and Cooperation, Josep Borell Fontelles, “deplored” the death of Mr. Montes and “demanded a swift investigation” of the matter.

In similar vein, European Parliament Member Ramón Jáuregui, who visited Nicaragua in January, also demanded an investigation of the matter. Jáuregui indicated that the information received by him thus far suggested that Mr. Montes was murdered in prison. “It is the worst news we could have received,” he tweeted.

The Inter American Human Commission on Human Rights also expressed doubts about the official version. “The circumstances [surrounding Mr. Montes’ death] cast doubts on the security protocols followed in prisons around the country, particularly when it comes to people detained in the context of the crisis”. The IACHR, as other international voices, called for an investigation and “sanctioning” of the responsible parties.

In addition, the organization stated without a doubt that Mr. Montes was a political prisoner, whose name was on the roster of people “detained in the context of the crisis.” On March 28th, the Ortega-Murillo administration agreed to release and expunge charges against all political prisoners within 90 days. Thus far, no one has been fully liberated.

In light of Mr. Montes’ death, the Alianza Cívica announced it would not be attending Friday’s round of negotiations. The coalition characterized Montes’ murder as the result of a “disproportionate act of violence” that should have never happened because Mr. Montes should have been “freed weeks ago, as he is on the list of political prisoners pending release.”

The Comité Pro Liberación de Presos Políticos called on Nicaraguans to picket and demand justice for Mr. Montes and freedom for all political prisoners. “We, mothers, do no have a Mother’s Day [May 30], we have nothing to celebrate, and now, with the death of Mr. Eddy Montes, we are even worse off.” Picketing is scheduled for 2 pm, local time, at the Managua Cathedral.

The Archdiocese of Managua, which has discouraged protesting on cathedral grounds in the past, called on Nicaraguans to pray for “all those deprived of liberty during the current crisis, so that their human dignity, rights, and their lives be respected.” The statement, issued via Twitter, does not discourage people from attending the picket this afternoon.

Relatives, friends, and supporters have been gathered around the Modelo prison since yesterday afternoon. Heavy riot police presence has been amply documented.

¹ An earlier version of this post erroneously attributed the audio recording to Yubrank Suazo. I regret the error.