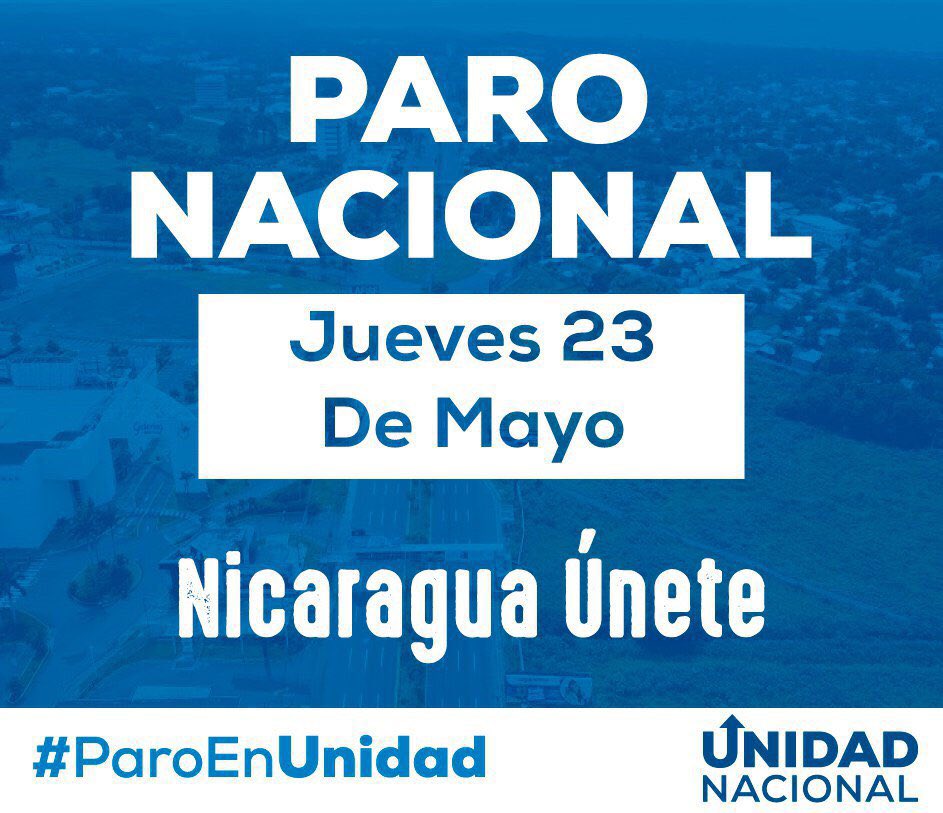 After another defeat at the OAS and under threat of a general strike, the Ortega-Murillo administration released a nine-point program to “consolidate stability and peace in Nicaragua.”

The document reiterates that the government will “definitively” liberate all political prisoners by June 18, regardless of their current status in the penal system.

Yesterday, Vice Minister for Foreign Affairs Valdrack Jaentschke presented excarceration numbers to the OAS as proof of his government’s “progress” in the negotiation process. Today’s statement, though, is a reversal of sorts, as it marks the first time that the Ortega-Murillo government said that excarcerated prisoners are not free, but under house arrest.

The document also states that “those who are still incarcerated, and those who have ongoing, open legal proceedings against them in absentia” will be “liberated.” 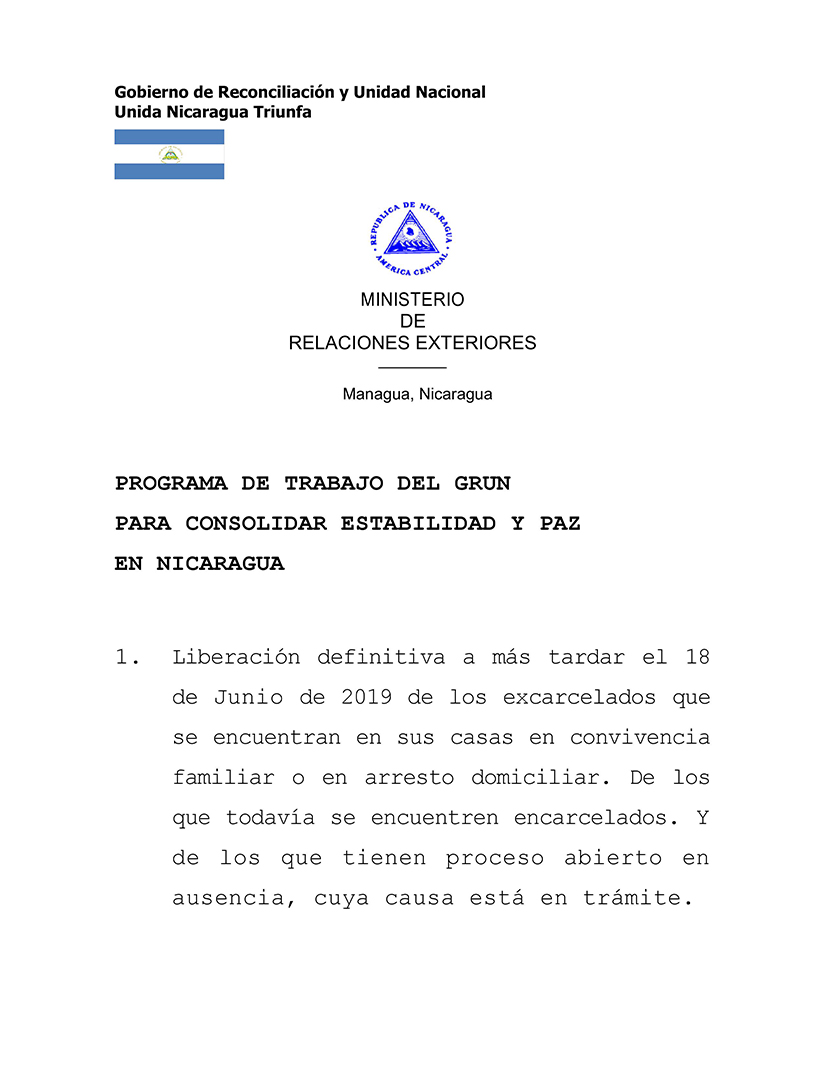 The Plan addresses issues included in the negotiation agenda that have yet to result in agreements, such as electoral reforms, as well as prior commitments that the government entered into when it signed the Agreement for the Strengthening of Citizen Rights and Guarantees.

Regarding elections, the government asserted that it will “continue with the process of strengthening electoral institutions,” with the help of the OAS. However, the Ortega-Murillo government will not allow for an early election. Instead, all reforms will be completed and implemented “for future general elections in 2021.”

In March, former Supreme Court Magistrate Rafael Solis indicated that, “If the final negotiation accord can be signed by mid May, there would be enough time to carry out the legal and logistical preparations [for an early election], including the elaboration of a new voter registry, issuance of voting IDs to all Nicaraguan citizens, […] and the possible vote of Nicaraguans who live abroad.”

As no agreements have been reached, the likelihood of an early election shrinks by the day, and the government has reiterated today that the matter is non negotiable. 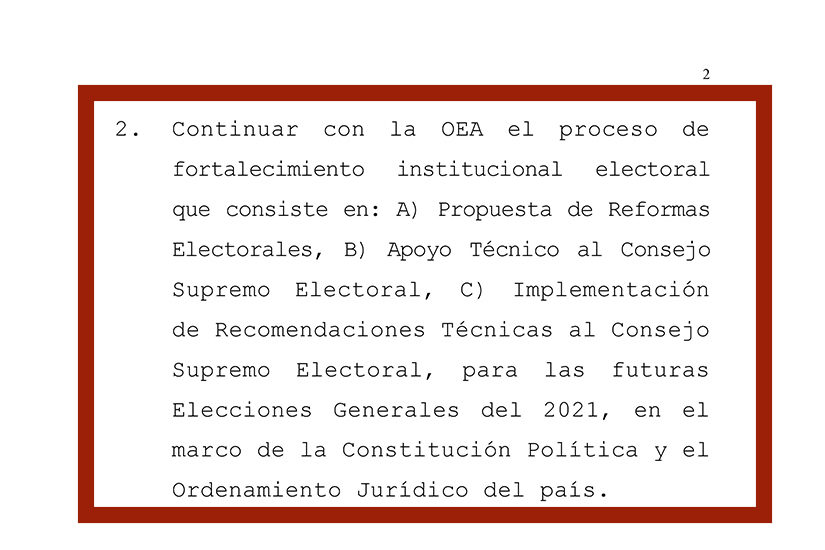 The Right to Free Assembly will be Guaranteed, but Problematic Overreach still Possible.

The government’s plan indicates also that they will “guarantee the right to public assembly, manifestation, and mobilization, in accordance to the Constitution, Laws governing the matter, and current norms.”

The Ortega-Murillo government made the same commitment in March, when it signed the Agreement for the Strengthening of Citizen Rights and Guarantees. This agreement acknowledged that the right of public assembly could not be curtailed through the requirement of a permit, “as long as free circulation of people and vehicles is not affected, and the normal intercourse among the population suffers no alteration.” Once the lawful requirements were fulfilled, “the National Police will authorize the exercise of this right,” read the agreement.

By accepting these conditions, the Alianza Cívica agreed to a loophole that allowed the Ortega-Murillo police to effectively continue blocking people from protesting. As a result, the agreement was broken and rendered ineffective barely 24-hours after the parties signed it.

Today’s Action Plan eliminates the sentence that authorized the police to “authorize the exercise” of the right to public assembly. However, it retains a problematic section of language, namely, it still requires adherence to “laws governing the matter and current norms.” This language has also been used by the police to assert unconstitutional authority to curtail the right to protest.

Indeed, the Ortega-Murillo police has repeatedly used Law 872, which establishes the duties of the National Police, to declare public assembly against the government illegal.

Article 7, paragraph p of Law 872 grants the police the authority to “grant permits and authorizations for special events that may affect free circulation of people and vehicles or may alter the normal intercourse among the population.”

In other words, the police can characterize anti-government protest as a “special event” rather than a constitutionally-protected right in order to declare it unlawful. 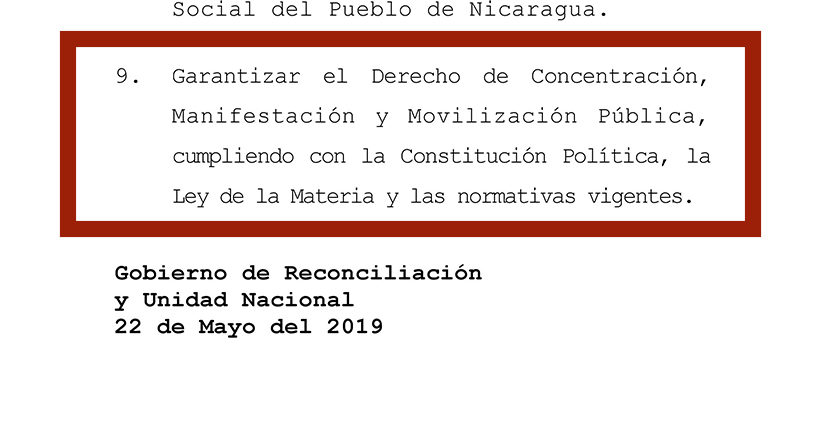 Government will sign Plan to Aid Victims into Law.

In July of 2018, Rosario Murillo announced her government’s plan to provide support to Victims. Murillo stated that the Ministry of Health (MINSA) and the Ministry for Family (MIFAMILIA) would provide mental health services to “the relatives of those who died and those who suffered severe wounds, as a result of the coup-associated and terrorist violence.”

Two days after Murillo’s announcement, the head of MIFAMILIA, Johana Flores, and the Vice Minister for Health, Enrique Beteta, went on En Vivo con Alberto Mora, a TV show on Canal 4, to discuss the plan. According to them, the goal was to “offer services to all victims.” However, the entities in charge of the plan and Ortega-Murillo propagandists continuously blamed “the coup-mongering right wing” for the violence.

On August 16, the Interdisciplinary Group of Independent Experts (GIEI, by its Spanish acronym) indicated that it had not been able to “present a technical analysis of the Plan to Aid Victims and their Families” because  the Ortega-Murillo government refused to hand over “files, forensic reports, detainee lists, and the plan for reparations.” As a result, there is no evidence to indicate that this plan meets international standards.

No one, outside of the Ortega-Murillo government has seen this plan.

Now, the Ortega-Murillo government aims to “elevate” this Victims’ Aid Plan, or something similar to it, into law. Moreover, the government’s proposal also expresses a commitment to “continue making calls for reconciliation among Nicaraguan families, in order to create a climate of trust that strengthens the Culture of Peace that the Nicaraguan People require”. This section of the new Action Plan reuses the same language included in the Law for a Culture of Dialogue, Reconciliation, Security, Work, and Peace, signed in January.

According to the Inter American Commission on Human Rights (IACHR), this piece of legislation “does not conform to international standards regarding truth, justice and reparation.” The IACHR indicated that the law did not address:

“Truth-clarification processes about human rights violations, their causes, and consequences; diligent and impartial criminal proceedings that allow identifying, prosecuting, and where appropriate, punishing those responsible for said violations; comprehensive reparations programs, and guarantees of non-repetition, including, among other actions, institutional reforms that address the serious institutional deterioration that has allowed for the generalized and systematic attack on the civilian population that has taken place in the country” (paragraph 3).

In other words, if the new Action Plan does not appropriately address these criticisms, it will not be effective in advancing the process of truth and reconciliation that Nicaraguans require. 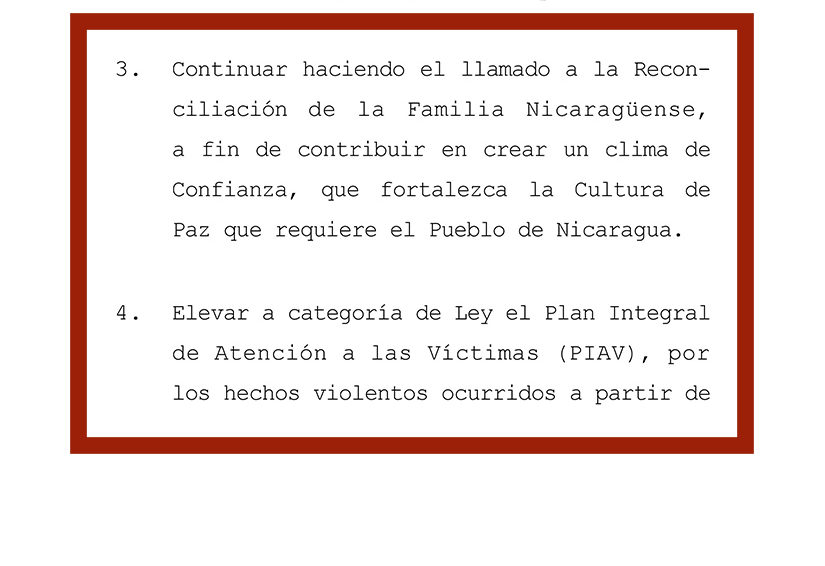 Paragraph 7 on the Ortega-Murillo plan proposes audits of “all businesses, non-profit organizations, foundations and other exonerated sectors” in order to “determine” whether these entities are using “exonerated” equipment, inputs, and materials appropriately. The audits will also extend to media organizations.

This proposal constitutes an overreach of authority, disguised under the color of law. Indeed, the the Nicaraguan Tax Code grants the authority to conduct audits to determine whether the beneficiary of a tax exoneration uses said benefit for its intended purpose, as opposed to using it for tax evasion. For example, if an audit discovered that a newspaper used the tax exemption on newsprint to somehow accumulate and resell paper at a markup and failed to declare the earnings, that would be illegal and punishable by fines, asset seizure, and closure (see article 137-138). However, if the same inputs are used to publish a daily newspaper, that is entirely legitimate, regardless of the bias the news organization may have.

And therein lies the problem. The government can and should ensure that tax payers aren’t evading their obligations, but anything beyond, such as penalizing opinion or actions that are lawful and even constitutionally protected, is an overreach and abuse of power.

With this in mind, the government’s intent to conduct audits should be considered a control mechanism, meant to have a chilling effect on the independent media and other civil society sectors that diverge from the Ortega party line. 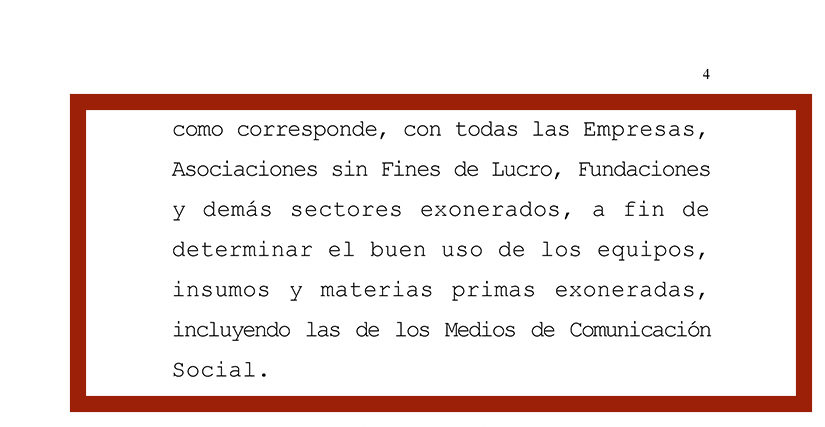 In March, the Ortega-Murillo government agreed to reconsider its decision to expropriate “buildings, capital, equipment, documents, licenses, and any other material and non-material good belonging to media of communication affected in the context of the events that occurred after April 18, 2018.” The government also agreed to reconsider its decision to “cancel legal personhood” of nine non-gobermental organizations.

Paragraph seven of the Plan does not indicate reconsideration, but an entrenchment in the Ortega-Murillo government’s effort to suppress dissent.

The Plan in Context

The Ortega-Murillo Action Plan became public on the eve of a general strike and citizen strike scheduled for Thursday, May 23. The action, organized by the Alianza Cívica, is set to begin at midnight, May 23. In anticipation, businesses and schools have been publicly announcing that they would be closed.

The Ortega-Murillo Action Plan was one of three government official statements aimed at discouraging participation in the general strike.

In other words, MITRAB told employers that they could not threaten employees with retaliatory measures that would be against the Nicaraguan Labor Code, such as deducting time from employees’ paychecks for their participation in the strike.

Though such breaches of the labor code could happen, MITRAB’s warning does not extend beyond a threat to punish employers, should they deny legal protections for their workers. They did not forbid any private business from closing their doors.

As of this writing, no banks in Nicaragua have publicly stated whether they will close or remain open. In contrast, several private businesses, schools, and universities have announced that they will not conduct business tomorrow.

For example, PriceSmart Nicaragua announced it would close its doors tomorrow. They have two stores in Managua. 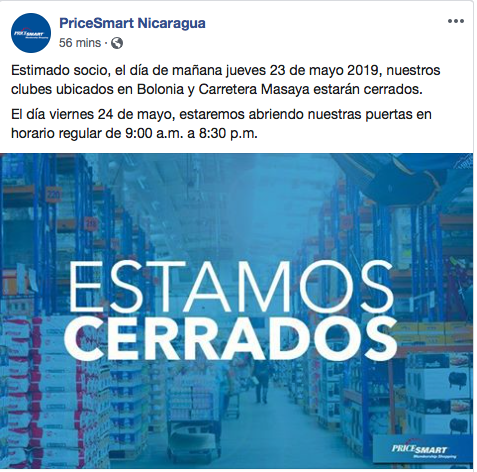 Small businesses are also closing their doors. This surf and skate store in Rivas will not be open. 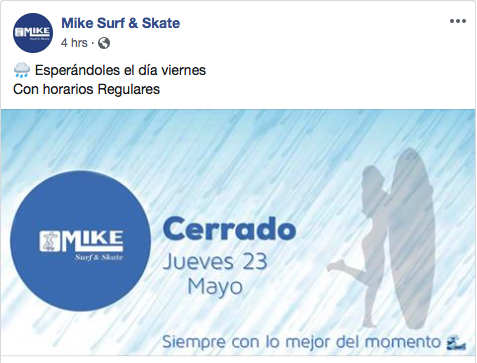 Neither will this clothing store in JInotepe. They explicitly say that the will not open “in support for the national strike.” 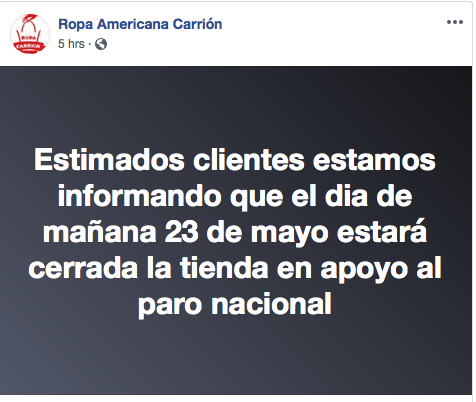 La Prensa announced its daily print edition would not be sold tomorrow, though they will continue reporting via social media and on their website.

The largest book retailer in Nicaragua is also closed.

As is the Literato bookstore, a smaller, independent shop in Managua.

Private schools will also be closed. Some, like the Jesuit-run Centroamerica school, cite security concerns.

The government’s Action Plan can only be viewed favorably based on the trust that one can have on the Ortega-Murillo administration. Indeed, ideas like promoting “reconciliation” or “ensuring the safe return of exiles” are worth considering and supporting. However, Daniel Ortega, Rosario Murillo, and the government they have installed in Nicaragua have irreparably undermined public trust across the spectrum of political opinion. The country is decidedly divided in their willingness to believe that  the Ortega-Murillo administration can and will represent the interests of all Nicaraguans, including those who oppose them.

Tomorrow, the divisions will be apparent, as many Nicaraguans will support the general strike, while others, willingly or not, will head to work and otherwise engage in their daily routines.