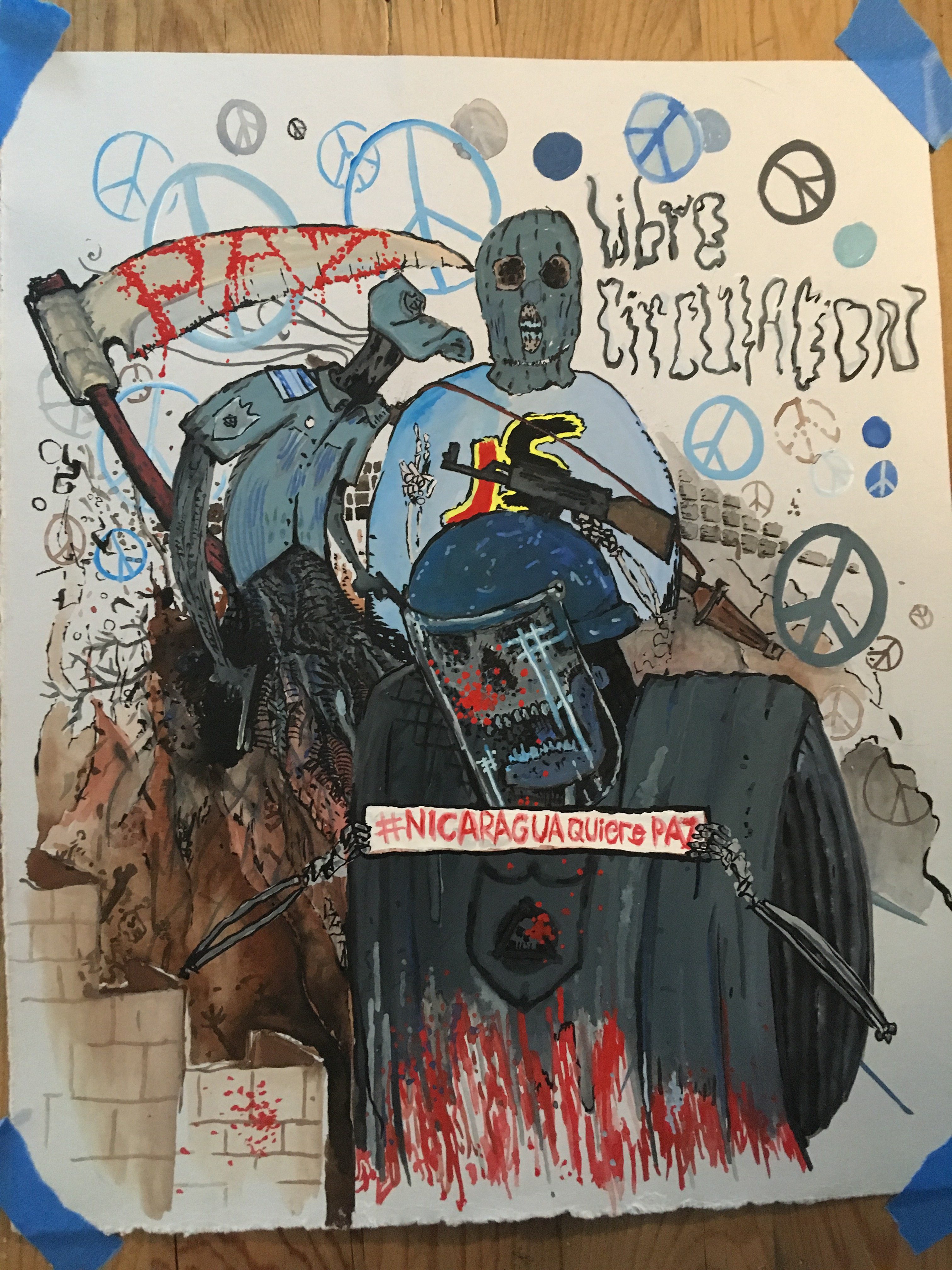 Hear my words, oh Lord
Hear my cries
Hear my protest
Because you are not a God who is a friend to dictators
nor are you a partisan of their politics
nor are you influenced by propaganda
nor are you in cahoots with gangsters.

It’s very common to think of propaganda as a very powerful form of brain washing. In fact, that was the prevalent view scholars held early on, when propaganda began to be studied in earnest. Propagandists themselves certainly believed as much. Take, for example, Edward Bernays. Bernays pioneered the field of public relations. He believed that manipulating public opinion was a noble quest and an important part of the democratic process, and that propagandists were unseen, albeit enlightened, individuals:

The conscious and intelligent manipulation of the masses is an important element in democratic society. Those who manipulate this unseen mechanism of society constitute an invisible government which is the true ruling power of our country (Bernays, 1928, p. 9).

In other words, Bernays argued that the real power does not reside in the apparatus of government. Real power is hidden, behind the scenes, and held by “unseen” people. We don’t know who they are; they don’t know us, but they have the power to bend us to their will.

However, the field of mass communication research has moved away from Bernay’s one-size-fits all view of propaganda. The prevailing view today is that media messages, in general, influence people in different ways. To put it differently, the consensus among media scholars is that individual differences matter. Those differences, in experience, culture, gender, race, beliefs, etc., shape how we seek out, consume, and process any media message, including propaganda. That is why propaganda can be very impactful for some people, yet for others, the impact is limited, or non-existent, or may even backfire.

Jowett and O’Donnell (2012) indicate that the impact of any propaganda intervention is shaped by several factors, including “pre-existing attitudes, [and] patterns of social relationships” (p. 168). In addition to these factors, phenomena like selective exposure, selective perception, selective interpretation, and confirmation bias can influence how we access and process propaganda messages.

So, what are these phenomena, and how do they work? Let’s start with selective exposure, perception and interpretation.

Selective exposure, perception, and interpretation rest on the assumption that we have free will to make choices, and that our pre-existing beliefs, values, and world views influence our choices. In other words, we are more likely watch, read, or listen to media outlets that validate our beliefs (selective exposure). We are also more likely to accept information gleaned from the media as true if it fits our world view (selective perception), and finally, we are more likely to interpret that information in ways that support what we already believe (selective interpretation), even if the information is untrue or actually contradicts our beliefs (Sullivan, 2009a, 2009b, 2009c).

Selective exposure, perception, and interpretation may explain why people are responding so differently to Orteguista propaganda efforts. It starts with the sources of information we choose to access, and it evolves into an echo chamber, where all messages validate our pre-existing beliefs. Another name for this phenomenon is confirmation bias. Confirmation bias makes us more likely to “ignore information that is inconsistent with our beliefs”, or to find clever explanations to justify it, as a way of protecting our selves from confusing contradictions and challenges to our core beliefs (Casad, 2007).

But, what does any of these phenomena have to do with Daniel Ortega?

Think about it this way: the OrMu Propaganda Machine is not necessarily successful in convincing the skeptics. However, it is very successful in it efforts to empower and encourage the true believers. Orteguista propaganda, in other words, strengthens the sense of community among Ortega’s followers. Demonizing the opposition is a way of achieving unity.

Kenneth Burke described this demonizing aspect of propaganda, in his analysis of Mein Kampf. For Burke, movements bring together people with disparate backgrounds and interests. Those people must be united somehow, and an effective way to achieve unity is by creating a demon, that is, a target for collective anger, because, “If one can hand over his infirmities to a vessel or “cause” outside the self, one can battle an external enemy instead of battling the enemy within” (Burke, 1957, p. 174). Once the devil is in place, “all proof becomes automatic” (p. 174).

The Orteguista Propaganda Machine has been relentlessly creating devils. I discussed the process, in general terms, in Part 1 of this series. Now, it is time to look at specific cases in more detail, starting with the case of Felix Maradiaga, the executive director of the Instituto the Estudios Estrategicos y Politicas Publicas (IEEPP). Mr. Maradiaga is a well-respected Nicaraguan social scientist and human rights activist. Among other distinctions, he was named a Yale World Fellow and a Young Global Leader. However, these accomplishments were of no consequence when Mr. Maradiaga became the target of a smear campaign. On June 5, 2018, the Nicaraguan police singled out Maradiaga as the leader of a criminal organization, engaged in activities that ranged from hiring hit men, to arson, destruction of property, robbery, looting, and murder. The same day, a video posted to YouTube made spurious arguments against Mr. Maradiaga. The video combines the police press release accusing Maradiaga with materials collected from his social media accounts. These materials are used to suggest that every time Maradiaga had spoken in support of protesters held illegally at El Chipote, he was actually rallying support to liberate members of his criminal organization, primarily the individual known as Viper.

Using Jowett and O’Hara’s terminology, the video is an example of “black propaganda” because the source is concealed through a pseudonym. Indeed, the user who uploaded the original video to YouTube is only identified as “Nicaragua Azul y Blanco”. To date, this user has uploaded 27 videos, with titles like “Golpe Blando en Nicaragua” (soft coup in Nicaragua), and “La Peor Humillacion no son Nazis son M19 Nicaragua” (The worst humiliation, it’s not the Nazis. It is M19 Nicaragua). The videos repeat common themes of orteguista propaganda, including the claim about a soft coup, and the characterization of protesters as criminals. The rhetorical appeals, in other words, are the same ones that are utilized in official Orteguista outlets.

Our cognitive biases can lead us to believe spurious information, simply because it confirms our pre-existing beliefs, and it can lead us to double-down on those beliefs, even in when faced with mountains of contrary evidence. These tendencies can have serious consequences. In the United States, for example, cognitive biases may have led Edgar M. Welch to drive six hours from his home in North Carolina, to a pizza joint in Washington, D.C. His purpose was to help rescue child sex slaves, who were supposedly being held in the basement of Comet Pizza. Mr. Welch was armed with an AR-15 rifle, which he fired inside of the restaurant. He was promptly arrested, and fortunately, no one got hurt.

Pizzagate was, of course, a complete fabrication and a conspiracy theory, and you could dismiss Mr. Welch as an extreme outlier. In Nicaragua, though, we have a systematic and well-organized machine, that churns out propaganda that targets and vilifies groups and specific individuals. This is a dangerous practice, as pointed out by the Interamerican Commission on Human Rights (IACHR). On July 11, the Commission stated that “public officials must abstain from making stigmatizing declarations against human rights defenders […]. The Commission has indicated that repeated stigmatizing statement can contribute to the exacerbation of the hostile climate and intolerance among certain sectors of society, which could put lives and physical integrity of human rights defenders, increasing their vulnerability. Other public officials and sectors of society could interpret [these stigmatizing declarations] as instructions, instigations, authorizations, or support for acts against [human rights advocates’] life, personal security, or the violation of other rights.” (“CIDH”, 2018, para 15, my translation).

The Commission’s concerns have not been unfounded. A few days prior, a group of hooded paramilitaries detained Mr. Maradiaga, as he was headed to Matagalpa, to participate in a march. Video of the incident shows Maradiaga trying to reason with his captors, who insisted that he was directly responsible for the violence nationwide. “Show me one video where I’m holding a weapon”, says Maradiaga. He points out that there are false rumors being spread about him, and states very clearly that he is a pacifist. One of his captors retorts: “Do you know how many people got beaten up at the barricade, because you ordered it?”

Once we have formed an impression, it is very difficult to convince us otherwise, as this example indicates. For that reason, the concerns expressed by the IACHR are more than warranted. Mr. Maradiaga himself was attacked again on July 11, the very same day that the IACHR issued its statement. This time, he was severely beaten and ended up hospitalized. Orteguista television station, Canal 2, published footage of the incident, using the title “Pobladores de Leon rechazan la presencia de terrorista Felix Maradiaga en su municipio” (The people of Leon reject the presence of terrorist Felix Maradiaga in their municipality).

Felix Maradiaga has not been the only target of the OrMu Propaganda Machine’s campaign. Catholic bishops and priests have also been targeted. Some priests, like  Harvin Padilla, of Masaya, have been accused as terrorist accomplices. Orteguista outlet, La Voz del Sandinismo, stated that Father Padilla was “directing the terrorists who assassinated police officer Gabriel Vado”. Another priest accused of crimes was Juan de Dios Garcia, of Jinotepe, who was singled out as the “lead torturer at the San Jose School” in a video presented by Orteguista Foreign Minister, Denis Moncada, at the OAS on July 18.

The propaganda efforts horrify many Nicaraguans, particularly those of us who oppose the regime. We probably won’t shift our position, merely because we watched a video. Perhaps convincing us is not the point at all. Unifying and mobilizing supporters is a more likely outcome.

Orteguista propaganda is a weapon.