UCA and UAM Students Protest on Campus Against Ortega

This morning, students at the American University (UAM) walked out in protest against the government of Daniel Ortega and Rosario Murillo. The protest that began at around 10 am, local time, occurs one day after police officers tried to crack down a similar action at the Central American University (UCA).

In a widely-circulated video, police officers from the Special Operations Police Branch  (DOEP) are seen pushing against the gate in an attempt to forcefully enter the campus UCA campus. This action is illegal under Law 89 — the Higher Education Autonomy Act –. Law 89 states that, “University grounds and campuses are inviolable. Police forces can only enter with written authorization from competent university authorities.”

Until today, the UCA has been the only higher education institution in which protests have been held with regularity, as the university’s Jesuit administration has not denied its students the right to free assembly and mobilization on campus.

On the contrary, UCA as an institution has actively condemned human rights abuses committed by the Ortega-Murillo government. University rector José Idiáquez, for one, described Daniel Ortega as someone who would be remembered as a murderer.

UCA’s institutional stance against Ortega does not end with Idiaquez. In September, the university’s Institute for the History of Nicaragua and Central America (IHNCA) and the Association of Mothers of April (AMA) hosted a one-month exhibit titled “AMA y No Olvida: Museo de la Memoria Contra la Impunidad“, “LOVE and Don’t Forget: Museum of Memory Against Impunity.” The exhibit collected photographs, artifacts, and life histories of the victims of state-ordered violence in Nicaragua.

With support from UCA administration, students have felt safe protesting. Yet that is not the case for students at the UAM.

UAM has deep ties to the FSLN. In 2007, the Army’s Pension Fund acquired a majority stake of UAM, and though the institution mainly focused on elevating its profile and prestige, the Army can and has determined hiring and firing. For example, in 2015, Rector Ernesto Medina notified two faculty members known for their anti-Ortega stances that they were being fired. When student’s protested, Medina told them that “in any institution, the owners, the manager, and the directors make decision that can be unpopular. That’s what happened here. We have people who own the university and they have a vision. They believe that a change in direction is needed, and they have chosen people to lead that change. We have to accept it.”

Medina’s stance changed dramatically after protests erupted in April of 2018. He sided openly with the opposition to Ortega, serving as an advisor during the first national dialogue, after Ortega vetoed him as principal negotiator. Then, in June of 2018, Medina criticized Ortega “trying to resolve the crisis through repression” during an interview with the EFE wire service.

Medina eventually stepped down and was replaced by Martín Guevara, an engineer whose main claim to fame was as a master chess player. Guevara’s selection may have been an attempt to ease UAM back into an apolitical vacuum of complacency. However, UAM students have not always complied with the administration’s wishes.

In July, UAM students staged a remarkable protest. After university authorities denied a request to dedicate the 2019 graduation to Rayneia Lima, her classmates planned to hold a moment of silence in her memory.

Lima was a Brazilian medical student, who was shot and killed Managua when she passed a group of “pro-government civilians” on her way home. Pierson Gutiérrez, a member of the sandinista party, confessed to the murder. He was released under the Ortega-Murillo Amnesty Law, in spite of the fact that the government never acknowledged him as a paramilitary operative, and that Lima’s murder had nothing to do with crimes associated with the protests.

Pickets were planned at the Ruben Dario Theater to protest Gutierrez’s release. However, the protests did not materialize because UAM decided to postpone commencement, claiming technical difficulties at the theater. 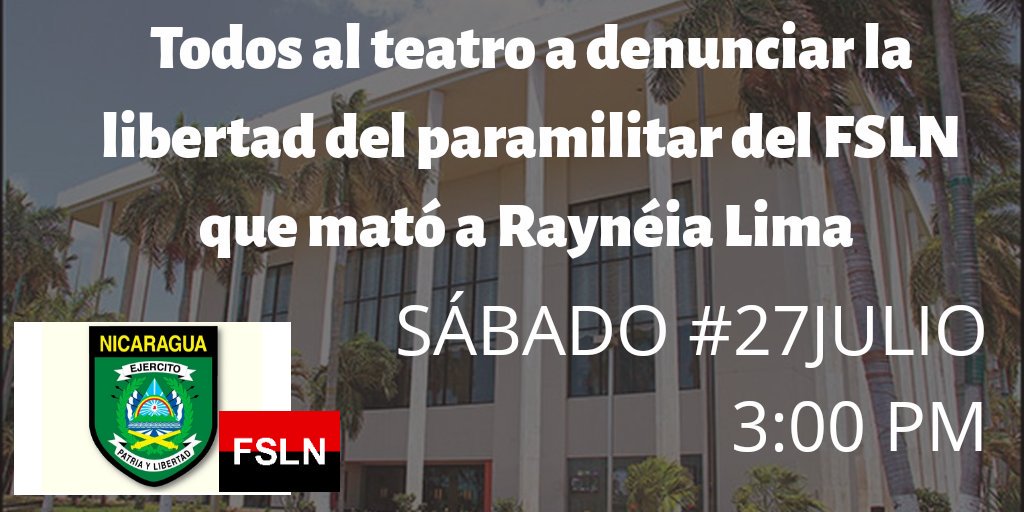 The majority of the students set to graduate did not buy the excuse, as they suspected that the real reason was to avoid embarrassing the president and his family. Ortega’s grand daughter, Ariana Ortega was one of the graduates.

Students protested on campus and forced Rector Guevara to award their diplomas without any of the normal trappings of commencement exercises. Ariana Ortega did not attend.

The ceremony turned into the most watched graduation in the history of the university, as media outlets like Articulo 66 streamed it over social media. At one point, over 3000 people were watching the live stream.

Today’s protests come during a highly volatile week, which has seen an escalation of tensions between the Catholic Church and the Ortega-Murillo government, the arraignment of 13 members of the Blue and White Unity coalition, and the release of the report of the High Commission on Nicaragua to the Permanent Council of the OAS.