Who owns the Blue and White in Nicaragua? A Comment on the Symbolism of the National Flag 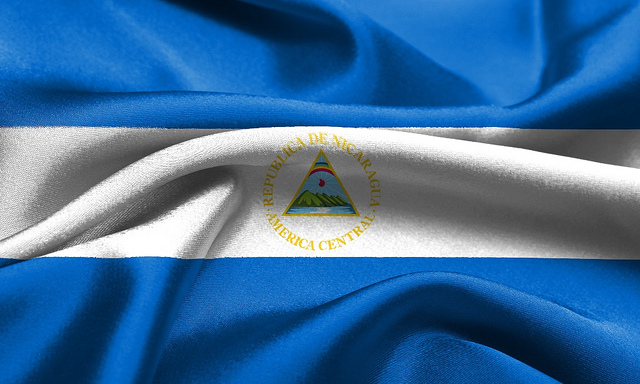 A little over a century ago, Emile Durkheim argued that flags are the modern day equivalent of a totem, the symbolic representation of a sacred being, worshiped by a clan. He described flags as markers of group identity, as “the sign by which each clan distinguishes itself from the others, the visible mark of its personality, a mark borne by everything which is part of the clan under any title whatsoever, men, beasts, or things.”

The flag represents the clan, according to Durkheim. Yet it also evokes feelings among clan members. Flags are symbols that are “loved, feared, and respected”, and to which “one is grateful” and willing to “sacrifice oneself.”

One-hudred years later, I have found myself pondering Durkheim’s work when I think of my own flag, the Nicaraguan flag. The Azul y Blanco — the Blue and White — is at the center of a battle for the consciousness of the nation. On the one side, protesters have infused the Blue-and-White with meanings of resistance. On the other side, the Ortega-Murillo administration strives to reclaim the flag as a symbol of the whole nation, even after months of criminalizing its display, that is, when it is in protest. In this post, I discuss both uses, and present examples gathered on social media.

Flags as Protest: Evidence from the Field

Flying the flag in protest is protected speech under Article 30 of the Nicaraguan Constitution, which states that “Nicaraguans have the right to freely express their thoughts in public or private, individually or collectively, through speech, in writing, or any other means.” However, Protected speech has become a figment of the collective imagination in Nicaragua, unless the person engaging in a speech act supports the Ortega-Murillo government. If not, the police is there, ever watchful, to harass, detain, and intimidate citizens for their acts of protest.

Article 30 of the Nicaraguan Constitution.

Indeed, the police’s actions in recent months have done nothing but confirm the analysis performed by the Interdisciplinary Group of Independent Experts (GIEI, by its Spanish acronym). GIEI was tasked by the OAS investigate what had happened in Nicaragua during the period of April 18 to May 30 of 2018. Their report, released in December of the same year, stated that the “actions of the National Police of Nicaragua […] reveal an array of institutional practices that continuously violated human rights and became increasingly more serious (p. 8).” These violations include:

[A] massive and indiscriminate policy of arbitrary and illegal detention of men, women and adolescents during police raids. In addition to that, these detainees were subjected to disproportionate and illegitimate use of force, and there were complaints about inhuman conditions of detention in police cells and prisons. There were also reports that describe various forms of torture and sexual violence, which must be investigated when there are adequate institutional conditions to do so. The situation of detainees was further aggravated by the ineffectiveness of the writ of habeas corpus and judicial control over such abusive practices (p. 3).

At the time, GIEI recommended a thorough revision of the current internal procedures and regulations governing police action, including the dismissal of “known perpetrators” of human rights’ violations. Nothing of the sort has happened.

The Ortega-Murillo dictatorship rejected GIEI’s conclusions and has done nothing to reform the police forces. This failure to act has created and reinforced a de-facto police state, allowing the institution to violate civil and political rights with impunity. Police harassment of citizens for using the flag in protest is a common theme in Nicaragua these days, and it goes unpunished in a country where the police declared protesting to be illegal though a press release.

Since a press release was enough to suspend constitutional rights, it is unsurprising that police harassment against citizens for protesting with a flag occur, or that they have happened more than once. Examples include, among other cases, the detention of lawyer Avil Ramírez Mayorga in January of 2019, the summons issued to Carla Daniela Rodríguez, in August of 2019, and the police crackdown of a protest in Managua, which unfolded  today, September 21, as I began and revising writing this post.

Let’s start with Avil Ramírez. He decided to stand on a sidewalk along the Carretera Masaya with his Nicaraguan flag.  The police drove up to him, grabbed him, took him to El Chipote, and held him for several hours, pending investigation. Ramírez was then released without charges of any kind.

Now, let’s see what happened in the in the Lazo case. In August, two police officers delivered a summons to Carla Daniela Lazo while she was at work. She was to present herself to Commissioner Pedro Argueta for an “interview about issues of social coexistence.”

Ms. Lazo, a resident of Jinotepe, had been allegedly identified as one of the people responsible for draping the cape pictured below on Santiago, patron saint of Jinotepe. This happened on August 4, the last day of the celebrations honoring Santiago.

Ms. Lazo wrote about her interview with Commissioner Argueta on her Facebook page. The post described the commissioner as “treating” her “well”, but also as asking her if she was “against the government.”

He [asked] if I was against the government. I said yes. Then, he asked if I thought that doing political things inside the parish was a good thing. ‘Don’t you think that offends Patrón Santiago?.’ I responded that everyone had the right to express themselves however they want. I also repeated that I did not drape a cape on Santiago and that I wasn’t there when he entered the parish.

Mr. Argueta pressed on. He said that “after [people yell out a slogan], mortars are fired and then all hell breaks lose. In this situation, it is not appropriate to be making a public spectacle of oneself” […]. I repeated that I was not there, and even if I had I done it, there was nothing wrong with putting [that] cape on Santiago.” […] He then changed the subject. He asked me about my piercing and about the tattoo I have on my arm. I told him I had them because I liked them.

In spite of police harassment, Nicaraguan protesters have not stopped using the flag. In Jinotepe, for example, the Nicaraguan flag made several covert appearances throughout the celebrations honoring Santiago. A very visible example was this cape, showing the Nicaraguan flag, the Catholic Church flag, and the cross of Santiago, pierced by three bullet holes.

Folk dances were also fertile ground for small acts of protest involving the flag. This video shows the “Diablitos”, a folk dance performed every year during the main procession of the 24th and 25th of July, August 1st, and on the final day of the festivities. At the end of the July 25th procession, one of the dancers performed inside the Parish of Santiago while carrying a Nicaraguan flag upside down, a practice adopted among protesters to indicate that the nation is in distress.

Today is September 21, 2019. The Unidad Nacional Azul y Blanco, an opposition coalition in Nicaragua, called for a march in Managua to commemorate the one-year anniversary of the death of Matt Romero. Romero was shot and killed during a protest in support of political prisoners. His death has yet to be properly investigated. However, at the time, the police issued a statement blaming “violent terrorist groups” who “attacked families and their residencies with firearms, artisanal mortars, and rocks.” According to the police, Romero was caught in the crossfire  between the families under siege and protesters. Romero’s family and eye witnesses dispute the official account.

Images coming in from Managua show protesters displaying the flag prominently, in pickets throughout the city.

In response, the police deployed to key points, including the Pellas Building on Carretera Masaya. There, members of the Police Special Operations Unit (DOEP) used tear gas, flash bombs, and pellets to disperse the crowd. At least two protesters were wounded.

Suppression of dissent is part of daily life in Nicaragua. Paradoxically, the Ortega-Murillo government is also engaged in an effort to reclaim the flag as a national symbol. The following section provides an overview of some of the actions the government has taken.

The Flag as a Symbol of National Unity: Evidence from Ortega-Murillo Efforts.

September is known in Nicaragua as the “Mes de la Patria”, the month of the fatherland. It is when the country celebrates its two most important anniversaries, the Battle of San Jacinto (September 14) and Independence Day (September 15).

In mid August, Vice President Rosario Murillo announced a national plan to commemorate the national holidays, during her daily noon address to the nation. She called it “Patria para Todos, Te Amo Nicaragua” (Fatherland for All; I love you Nicaragua). A few days later, Murillo took to the airwaves again. This time, she read a poem she had apparently learned as a child.

When we were children, […] we recited poems to the flag […], but those verses are eternal. My little flag, I give you my love, and to defend you I am very brave. Blue and White are your colors and I carry them in my heart.”

As it turns out, Murillo appropriated a poem by Chilean Oscar Jara. She changed the colors of the Chilean flag, white, blue, and red, for those of the Nicaraguan flag. However, the Ortega-Murillo outlet, el19digital, described the poem as beautiful, without attributing it to its original author.

With the campaign officially underway, the media of the Ortega-Murillo Propaganda Machine and other Sandinista organizations began using hashtags #PatriaParaTodos (A Fatherland for All), #TeAmoNicaragua, (I Love you Nicaragua), and #SeptiembreVictorioso (Triumphant September) to signal their support. Nicaraguan flags began appearing everywhere.

Even government entities joined the campaign. For example, the Nicaraguan Tourism Institute encouraged people to visit various cities, as a form of “Turismo Patrio” (patriotic tourism).

On September 14, the flag was displayed prominently during the official celebration of the Battle of San Jacinto, where Daniel Ortega addressed the country.

The celebrations featured this young lady, performing for President Ortega and Vice President Rosario Murillo. She was dressed in a blue and white huipil.

#PatriaParaTodos was also use to showcase the police and announce a parade honoring their 40th anniversary.

In Nicaragua today, the contrasting uses of the flag cannot be reconciled easily, as the meanings associated with it reflect two completely different visions of what the nation is or should be. On the one hand, there’s the reality of protests and the systematic suppression of dissent. On the other hand, there is the Ortega-Murillo message of peace and normalcy. Both visions unfold under the ever watchful eye of a police force that acts without any checks and balances to its authority.

The contradictions are not unexpected, as the country remains divided over the significance, not only of the flag, but of the events that have been unfolding in Nicaragua since April of 2018. Unfortunately, there does not seem to be an end to the schisms, as the Ortega-Murillo government has a firm grasp on the state, and the opposition remains weak, fragmented, and ineffective.