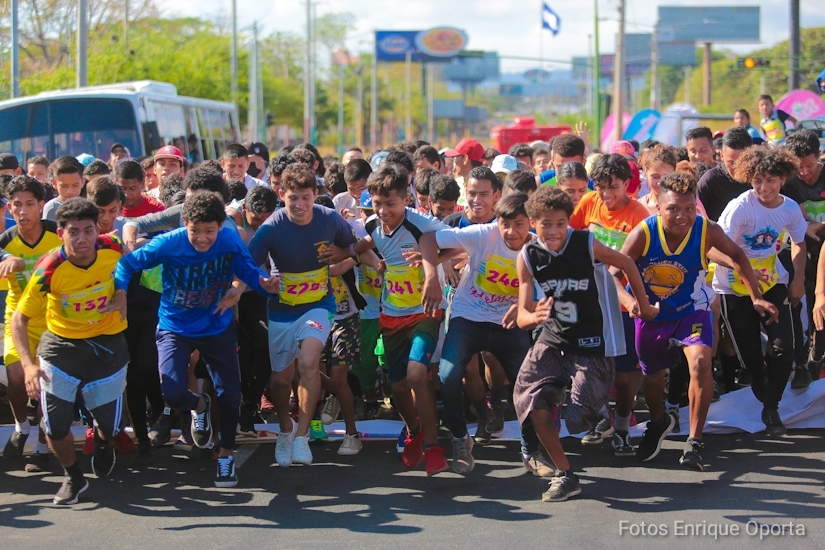 It has been 25 days since the WHO declared COVID-19 a pandemic. Throughout the period, the government of Nicaragua has carried out an “intense campaign” against the virus, according to Vice President Rosario Murillo.

“We have reached 25 days, lovingly, and responsibly caring for one another […] and promoting health, love, and life from every unit and health center in our blessed, loving, and forever free Nicaragua,” she said on Saturday.

But her government’s response is marred by inconsistencies, recklessness, and the conspicuous absence of President Daniel Ortega.

Ortega’s last public appearance was on March 12, when he participated in a virtual meeting, called by the Central American Integration System (SICA).

In his absence, Vice President Murillo continues as the public voice of the government.

Yet Ortega is seemingly in charge, according to his wife and Vice President. Every day, Murillo assures Nicaraguans that Ortega is still, very much, at the helm. “Our comandante Daniel” as she typically calls him, is “leading all the work we carry out, minute by minute, day and night, so that we may continue being blessed.”

Interestingly enough, though, Murillo has kept herself in seclusion as well. Her daily address is delivered through a phone call, as it has been for years.

Like Ortega, Murillo has not appeared in public since March 12.

And not a single member of the Ortega-Murillo family attended the funeral of Jacinto Suárez, earlier this week.

Suárez was a “militante histórico”, a legacy member of the Sandinista organization since the 1960s. A staunch Ortega ally and personal friend, he defended the Ortega administration’s actions during the 2018 protests in Nicaragua, which he characterized as a conspiracy “sponsored and paid for by the government of the United States.”

He died of renal insufficiency, after a prolonged illness.

Ortega was scheduled to present the Augusto C. Sandino Order to Suárez’s widow at the funeral, according to La Prensa.

Instead, the Nicaraguan ruler stayed in a self-imposed quarantine in his compound at El Carmén, a decision that contradicts his government’s stance on self-isolating.

According to Jorge Romero, director of the Gaspar García Laviana Hospital in Rivas, “it makes no sense to tell people to lock themselves in, because that will only lengthen the infection period. It is alarmist and extremist”, he said during a television appearance in which he represented MINSA.

However, there are indications that the official line could change soon. On Thursday, Murillo announced an extended Easter break for all government employees, from April 4-15. She also stated that schools would be in recess from April 4 to April 20.

In spite of this covert quarantine, though, the Ortega-Murillo state apparatus is still actively organizing and promoting public events, festivals, and pageants to celebrate Easter, based on the premise that there “is no local community transmission” in the country.

The official message is supposed to be reassuring, but even the Sandinista elites themselves do not appear convinced. The funeral of Jacinto Suárez put the contradictions on full display.

The Ministry of Health (MINSA), following the WHO’s guidance about wearing masks, states that you should do so “if you are coughing or sneezing”, and that it is otherwise unnecessary for a healthy person to use a mask, unless they are caring for someone “with suspected” COVID-19 infection.

Yet photos from Jacinto Suarez’s wake show several mourners wearing masks. Among them was Francisco Rosales, a magistrate in the Nicaraguan Supreme Court of Justice and long-time member of Ortega’s inner circle. 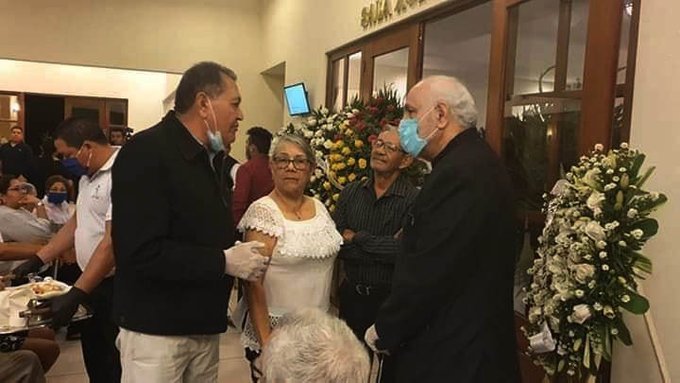 Francisco Rosales (pictured right), wears a mask during the wake of Jacinto Suárez, in Managua.

Suárez’s funeral, the following day, was another example of the breakdown of the Ortega-Murillo government’s message. Social distancing precautions were taken, by spreading out the seating arrangements.

The majority of the Nicaraguan people are not given these protections, when they attend government-sponsored events. Public events celebrated this weekend, to kick off Easter Week, provide multiple examples of crowds, standing shoulder to shoulder. In one instance, hundreds of people gathered in Managua to run a 3.5 Kilometer foot race, dubbed “Marathon of Love,” to welcome the summer season.

Citizens fill in, where government fails.

It would be mistaken to think that the entire country is convinced that risks of contracting COVID-19 are minimal, particularly in a country where the president won’t even appear on television or attend a friend’s funeral. Citizens are sharing images of empty streets, malls, parks, and plazas.

In Jinotepe, streets are practically deserted mid-afternoon. The caption reads, “Don’t listen to the Sandinista regime and expose people to contagion.”

The streets of León are equally empty. The caption reads “If we don’t protect ourselves against this deadly virus, no one else will.”

This mall, in Managua, is empty at 11:30 am. “People are protecting themselves against COVID19; they’re staying home.”

Granada is in a similar situation. The most popular avenue in the city, La Calzada, is deserted on a Sunday evening. Granada is one of the biggest tourist attractions in the country.

Some Nicaraguan small businesses are also taking precautions. This drug store, located at the Huembes Market in Managua, placed tape to enforce social distancing. The signs ask customers to “pay by credit card, preferably, because it contaminates less”, and to “not be an accomplice to the coronavirus. If you have a cough, cover up”.

But the best examples of citizen-driven public health initiatives involve small acts of solidarity, such as sharing soap and hand sanitizers.

In Granada, people are encouraged to help themselves to baggies of hand sanitizer, so they can clean their hands.

To date, MINSA has not disclosed basic information, such as the number of tests performed in the country. The institution maintains that there are only 5 COVID-19 cases, with one death, and one recovery. All cases are “imported”.

Today, though, the Ministry of Public Health in Cuba announced 19 new cases of COVID-19 in the island. One of them was identified as a female Cuban citizen, who had recently returned from Nicaragua.

This would be the second case exported from Nicaragua to Cuba, in spite of MINSA’s insistence that there is “no community transmission.”