The procession began about twenty minutes late, at around 2:30 pm, as hardly anything in Nicaragua ever starts on time. It was the fifth day of the novena, the nine day period preceding the feast of Santiago Apóstol in Jinotepe. It was also July 19, the fortieth anniversary of the Sandinista Revolution. A contingent of police officers from the Dirección de Operaciones Especiales Policiales (DOEP) — police special operations — was at hand to guard the procession of the faithful and the curious, walking from the Parish of Santiago to a private home in the neighborhood of San Antonio, about ten blocks away. There, we would stop, pray a rosary, sing the traditional Alabado, and attend mass before heading back to the parish.

I was born and raised in Jinotepe, and though I no longer live there, I do try to go back as often as possible, always in July. I’m not alone; most Catholic Jinotepinos and Jinotepinas return home, or at least try to be there for the main processions, the Tope on July 24th and the Procession of Santiago on July 25th. It had been five years since my last trip back.

I return, not out of devotion, but out of nostalgia. There is something sweet and innocent about the traditions of my home town. The belief in Santiago’s ability to perform miracles is deeply entrenched in Jinotepe, and why would it not be? for starters, even the fact that Jinotepe is home to this particular image of Santiago is considered a miracle.

Indeed, legend has it that the images of three saints, Santiago, San Sebastián, and San Marcos, survived a shipwreck. The three images floated to shore and were found by fishermen in a place called Veracruz de Acayo. They were meant for the towns of Jinotepe, Diriamba, and San Marcos. The only one that was obvious was San Marcos. The other two were up for grabs, though legend has it that they were engraved with texts stating “Santiago for Jinotepe”, “San Sebastián for Diriamba,” and “San Marcos for San Marcos.”

Nevertheless, Santiago and San Sebastián ended up in the wrong towns, and thus began trouble. Each night, the images would trade places. Each day, the people of Jinotepe and Diriamba would accuse each other of theft, and in the version I was told, machetes were involved (why not?). It wasn’t until someone saw the images sneaking around at night that people realized that Santiago was meant for Jinotepe and San Sebastián for Diriamba, and that there was no theft or ill intent. The towns reconciled, and every year on the feast of each saint, the other two come to visit. Thus, we commemorate the ties that bind the three largest towns of Carazo together.

It is a beautiful sentiment, marred this year, as the entire Feast of Santiago took place under the watchful eyes of the DOEP. They were there, in their crisp, black uniforms

DOEP is essentially the Nicaraguan version of a SWAT team. According to the police’s website, they specialize in “combatting organized crime and other crimes, and restoring public order.” They also deal with hostage situations, crowd control, and act as protective detail from the president, vice-president, and other important government authorities and dignitaries.

Those are their official duties, but since 2018, DOEP has become far more sinister.

In all the years I’ve attended the processions, I have never seen a single DOEP officer. This year was different, as Nicaragua has become a police state and DOEP is everywhere. Their presence is unsettling, to say the least. In a town like Jinotepe, that endured a violent attack on July 8th of 2018, DOEP is downright intimidating.

However, Jinotepinos and Jinotepinas are not alone in their unease towards DOEP and police in general. Only the most oblivious or, perhaps, the most callous would not recoil.

The Interdisciplinary Group of Independent Experts of the OAS (GIEI) compiled several images and video showing police officers, including DOEP members, using disproportionate force against protesters in 2018, when the crisis began. Only the most oblivious, callous, or fanaticized can justify it. Even then, I cannot comprehend the mental gymnastics that go into defending a police force that was partly responsible for hundreds of civilian deaths.

And deaths continue. In July of this year, DOEP members were identified as responsible for the death of Bryan Murillo López, a 23-year-old resident of León. Relatives of Mr. Murillo spoke to the Centro Nicaragüense de Derechos Humanos (CENIDH) and described how police officers, including DOEP members, armed with AK-47s, entered their home without a warrant and “began shooting indiscriminately”. Bryan Murillo was killed as a result, and two other family members were “seriously wounded.”

The Ortega-Murillo police disputes this version. In a press statement, the police identified Mr. Murillo López as “a fugitive” being sought for armed robbery. The police also claimed Mr. Murillo López resisted arrest. He and “his companions […] armed themselves with machetes and charged against the patrol officers”.

As with all other instances of police abuse and illegal conduct, the case of Bryan Murillo will not be appropriately investigated. However, the police’s press release repeated that the institution is “committed to safeguarding the security and tranquility of the Nicaraguan people, families, and communities.”

Two days after Mr. Murillo’s murder, I attended the fifth day of the Novena de Santiago. The small procession I participated in was led by a contingent of DOEP officers. Five of them were wearing body armor. They led the way, riding on the bed of a police pick up truck, as we followed behind. One of them filmed and photographed the us. I would like to believe that it was just out of a desire to document our traditions.

All told, there were seventeen police officers, between DOEP members, traffic police, and beat cops. Even Jinotepe’s Police Commissioner, Pedro Argueta, showed up at some point.

If you’ve never been to a novena procession in Jinotepe, I should explain that these are not massive endeavors. On the contrary, the novenas tend to be small. In other words, the deployment of police I photographed on July 19th in Jinotepe was surrounding the crowd shown in this short clip.

This is the first time I’ve ever attended a novena procession myself, as they are held during normal working hours and are very time consuming. Novena ceremonies involve a rosary (just the five mysteries of the day, but that’s enough), the singing of the Alabado, and a mass. In other words, you can attend if you have an entire afternoon to kill, as the entire thing, from beginning to end, takes about four hours. If you are ever in Jinotepe, attending is absolutely worth it, if only just to hear the Priostes, Santiago’s custodians, lead the faithful in the singing of the Alabado. This part of the ritual alone takes approximately fifteen minutes, when done properly. The clip below is an excerpt.

Granted, I have a soft spot for the Alabado. On July 19th, though, I experienced it as never before, with police officers were posted on both ends of the street. Beat cops and traffic took the north side.

DOEP officers took the south side of the street. In the middle were Santiago’s devotees, sitting in white plastic chairs, praying the rosary, singing the Alabado, and participating in a Catholic mass. I left before mass began, as I could no longer sit there, pretending that singing the Alabado under the watchful eyes of the DOEP was normal.

Sadly, daily life under the watchful eyes of the DOEP and police in general has become commonplace in Nicaragua. In Jinotepe, you run into DOEP officers every time you head down to the town square. You’ll find them there, eating corn on the cob, talking on the phone, hanging around the Pali supermarket, or walking in the park. They don’t seem to ask questions or stop people from going about their business, at least as far as I saw, but they are always there, in their crisp, black uniforms that only used to come out when there were protests.

I saw DOEP riot officers plenty of times, as a college student attending the 6% marches in the 1990s. I saw them during the 2013 INSS protests, and I saw them again in 2018.

Their presence is chilling. It is talked about behind close doors, as people do their best to live their lives, in spite of them. 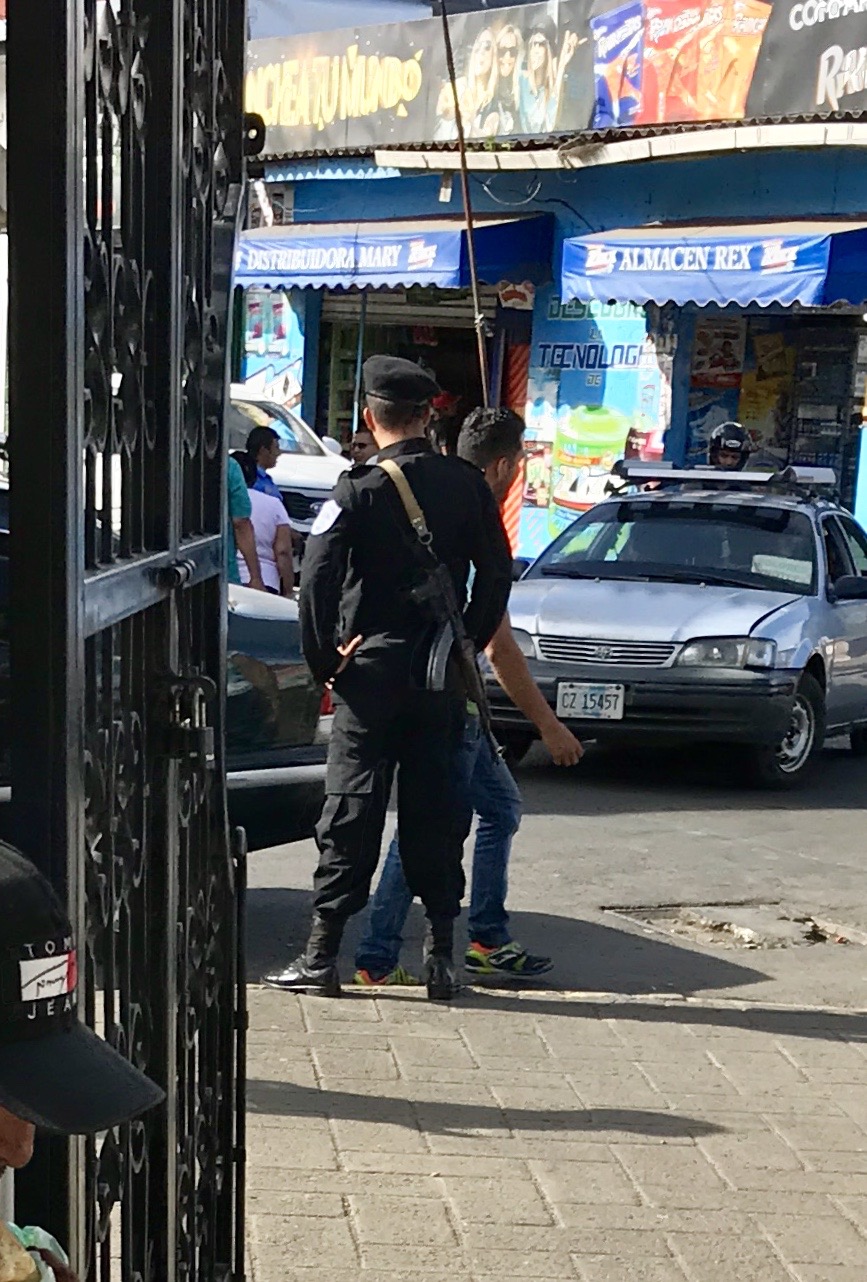 DOEP officers only wore their body armor on July 19, and I understood the message loud and clear. I think most of the town did as well, as the only safe place to put a Nicaraguan flag was at the feet of Santiago.

At least then, you could pretend it was decoration.

In the following days, I saw DOEP officers walking alongside the faithful and the less faithful during every procession, major or minor.  Some carried night sticks, others carried rifles.

Other times, DOEP officers would be close by as people enjoyed street performances by the many promesantes, that is the people who have promised something to Santiago in gratitude for favors received. Santiago draws many promesantes per year. Tourists may think it’s just another street performance, but true Jinotepinos and Jinotepinas know better.

After all, he survived a shipwreck.

“Let us praise, a thousand times, the divine sacrament, so that all evil spirits be gone from this place.”

I wonder how many people saw that verse in a different light in 2019.