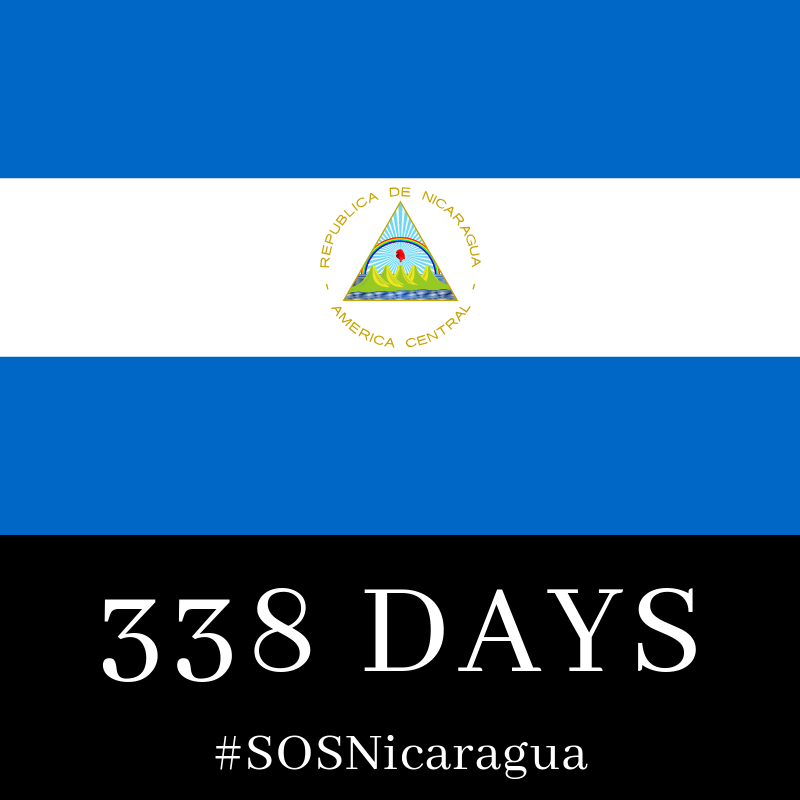 On Wednesday, UNAB asked Nicaraguans to join the “pitazo nacional” and the “cacerolazo nacional,” by honking their car horns and banging on pots and pans at 6 pm.

Many Nicaraguans joined in the cacophony of protest.

Tomorrow, UNAB is calling for another kind of protest, the piquete express. Public picketing anywhere and everywhere. UNAB even published a handy guide for picketing, via social media. It includes instructions like “gather a group of neighbors or friends, pick a well-frequented spot, plan your entry and exit route, ensure transportation, pick someone to film and photograph, and write a short statement describing the reason for your picket, and read it or print it on a sign.

Express picketing will take place this Saturday, from 2 pm to 4 pm, Managua time.

On other news, the Alianza Civica and the OrMu negotiators made some headway today at the INCAE, according to “Comunique Number 8”, released this afternoon. OAS envoy, Luis Angel Rosadilla has been officially accepted by both sides as “witness and international companion”. In addition, the negotiators announced that the process for the release of political prisoners will begin by “conciliating and updating lists” from the government, the IACHR, and the Alianza.

Both parties agreed to “request that the inmates be placed in the general system”, a request that was widely misinterpreted as meaning that the prisoners would be moved to general population and/or reclassified as common criminals. Azahalea Solis, from the Alianza, explained that placing someone in “the general system” simply means that prisoners will no longer be in maximum security.

Being placed in the general system means that prisoners like Miguel Mora would now be entitled to the same privileges of regular inmates, including regularly scheduled time on the yard so that they can see the sunlight.

In January, when the delegation from the European parliament visited El Chipote, MEP Jose Inacio Faria commented on the conditions that journalist Miguel Mora was being held in. Faria told Wilfredo Miranda of Confidencial that, “During the visit, we asked the prison’s director to take Miguel Mora out into the sunlight. He needs sunlight, vitamin D. He’s almost blind from being in the dark. The conditions in El Chipote are subhuman — they’re inadequate for raising pigs. The pigs in my county are raised in better sites than that cell. It’s unacceptable and shameful.“

In 2015, La Prensa published an expose of the Galeria 300, based solely on third-party accounts from family members of inmates housed inside. At the time, reporter Elizabeth Romero described this wing of La Modelo as “warehouses where inmates do their time”

[according to statements by relatives] the cells where prisoners are kept are mini ovens. Each cell has an area of 2-by-2 meters. The cells are hermetically sealed with a metal door that has a slot about five to ten centimeters.

According to La Prensa’s reporting, the 300 is a fairly recent addition to the Modelo, as it was built and commissioned in 2014. However, the conditions described then, which have been corroborated by several political prisoner testimonies, are inhumane.

The OrMu administration stated via letter to Luis Almagro that it would “continue and conclude with the excarcelation of prisoners, including the release of all people that the Interamerican Commission on Human Rights has identified as political prisoners.”

The IACHR categorized 647 individuals as political prisoners. This list does not include about 162 individuals who have been excarcerated since February 27.

Both negotiation teams also agreed to “request […] that the rules established by the United Nations for the treatment of prisoners be observed and that they are allowed visits in special situations and emergency.”

As to who is in charge of granting those requests, a fair assumption is that it would be Ortega himself, or, in his stead, the task would fall onto Interior Minister Maria Amelia Coronel Kinloch, as the prison system is directly under her purview.

The safety and well-being of political prisoners inside Ortega and Murillo’s penitentiaries is anything but certain, as all Nicaraguans have to go on is the word of an administration that has amassed a dismal record on human rights and with truth telling.