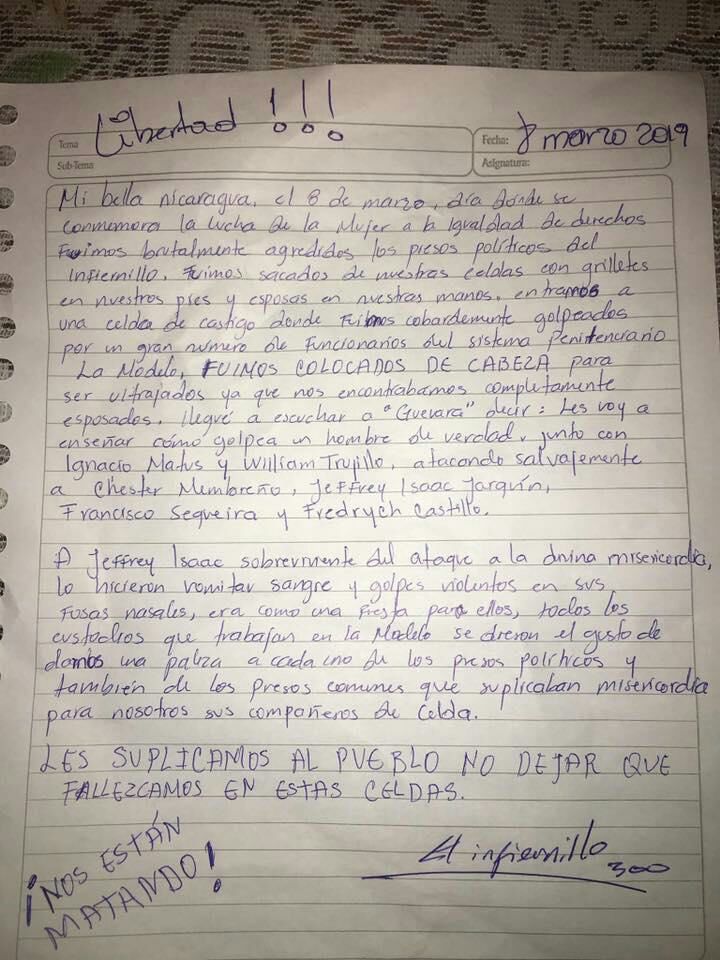 Mons. Waldemar Sommetag, Apostolic Nuncio in Nicaragua, visited the Modelo and the Esperanza prisons today and met with 16 political prisoners. The Nunciature issued the statement below, describing the visit as one in which the Mons. Sommertag, “had a personal, frank, and open conversation with each one of the detainees, listening with attention to their words, preoccupation, and hopes.” Then, the Nuncio reminded the 16 political prisoners about “the importance of prayer, particularly during lent.” He then told the prisoners to “have faith in God, so that we can enter in the mystery of divine mercy, which always waits, always forgives, because it always loves.” 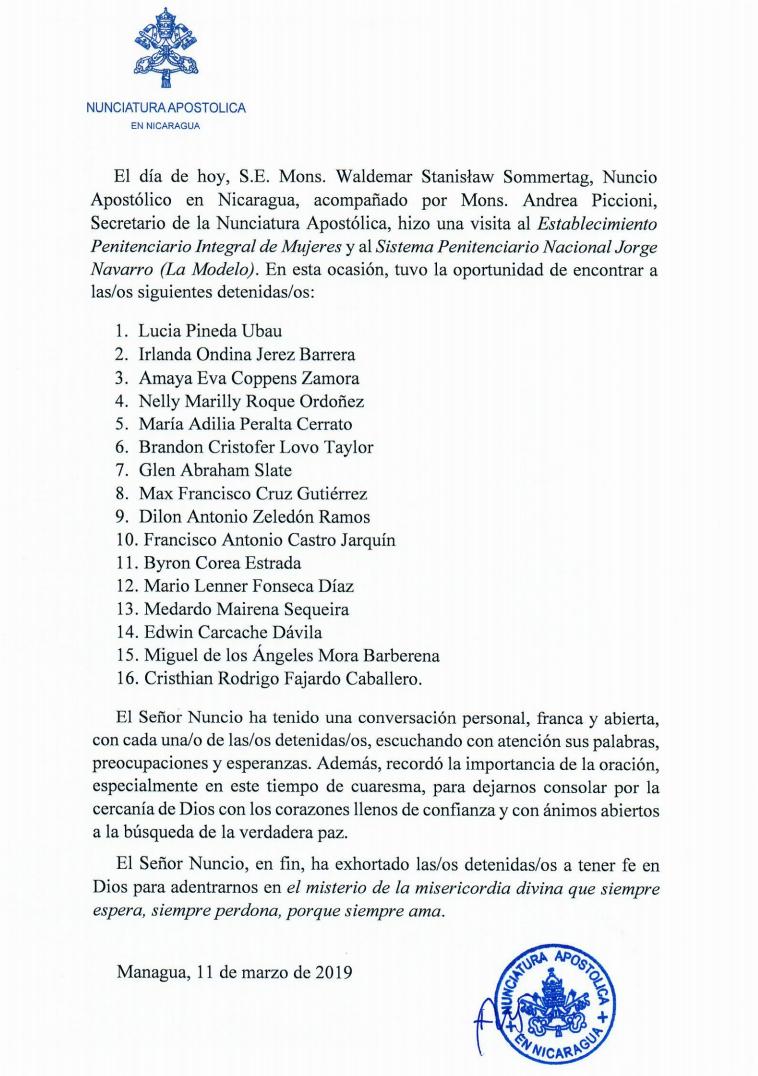 Pictures from the nuncio’s visit were made available to the media.

As a diplomat, the nuncio is expected to issue a diplomatic statement; it is the equivalent of Marco Rubio sending thoughts and prayers to gun violence victims. It is rote, and its a statement rendered even more absurd in light of a second letter, a gut wrenching, hand-written letter that hit social media at around the same time as the nunciature’s statement and pictures. It was an unsigned account of the events of March 8, inside the Modelo Prison. I don’t think we can fully appreciate the nunciature’s document without considering this testimony from inside the Infiernillo (the little hell), the maximum security wing of the Modelo. I offer this translation without further comment.

My beautiful Nicaragua, on March 8, a day in which the struggle for Women’s equal rights is celebrated, [we] the political prisoners of the infiernillo were brutally attacked. We were taken out of our cells with shackles bounding our feet and handcuffs around our hands. We came into a punishment cell, where we were cowardly beaten by a great number of officers of the Modelo penitentiary. We were hung upside down, in order to assault us, since we were in handcuffs. I heard “Guevara” [name of an officer] say “I’ll teach you how a real man hits.” Then, will Ignacio Matus and William Trujillo, [he] savagely attacked Chester Membreño, Jeffrey Isaac Jarquín, Francisco Sequeira, and Fredrych Castillo.

Jeffrey Isaac, who survived the attack on the Divine Mercy Church, vomited blood and was beaten violently on the nose. It was a like a feast for them, for all of the guards that work at the Modelo. They took pleasure in beating each one of the political prisoners, and even some common inmates who were begging for mercy for their cell mates.

WE BEG THE PEOPLE NOT TO LET US DIE IN THESE CELLS.

THEY ARE KILLING US!

Mons. Sommertag did not see any of the prisoners named in this letter, nor did he see Yubrank Suazo, the prisoner who filmed and released a video, defying the dictatorship on Saturday morning.