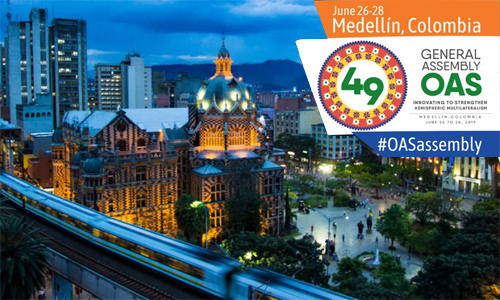 The 49th Regular Session of the OAS General Assembly kicked off this Wednesday in Medellín. The organization is expected to vote on a resolution addressing the situation in Nicaragua.

The resolution was put forth by the Working Group on Nicaragua, which includes Canada, Argentina, Chile, Costa Rica, Brazil, Peru, and the United States

The Working Group’s resolution is another step in the process that could lead to the application of the OAS Democratic Charter to Nicaragua, as the seven countries ask that the Permanent Council “appoint a commission” to push for peaceful solution to the crisis via “diplomatic efforts at the highest level,” as contemplated in Article 20 of the Democratic Charter. The commission would then have three months to issue a report to the Permanent Council.

The resolution would also urge Nicaraguans to resume “effective negotiation and good faith,” and “insists” upon the government “to allow” the reentry of the Inter-American Commission of Human Rights into the country.

The Ortega-Murillo government objected to the resolution being discussed “on the grounds that it is an act of interference in the internal affairs of Nicaragua.” The dictatorship also argues that the resolution ignores “the progress made [by the government] in strengthening peace and harmony among Nicaraguans. It also interferes with the advancement of negotiations through understanding and peace.”

In spite of the objection, the resolution was added as the final point of the agenda for the General Assembly.

On Eve of General Assembly, Almagro Argues that “Ortega is not Maduro”

The Ortega-Murillo dictatorship released one-hundred and six political prisoners through a controversial amnesty law. The last group, of fifty-six prisoners, included well-known leaders of the protest movement in Nicaragua, as well as journalists Miguel Mora and Lucia Pineda Ubau.

In spite of the amnesty, judicial processes against political prisoners have not been closed. Miguel Mora, Lucía Pineda Ubaú, Harvin Lesage, who were released under the amnesty law on June 11.

Judicial processes remain open for Eddy Montes, as well. Mr. Montes was shot and killed by a prison guard in May. He was summoned to appear before a judge this week, according to Julio Montenegro, a human rights lawyer for Defensores del Pueblo.

Secretary Almagro’s statements contradict the day-to-day reality in Nicaragua, as he believes that there is a significant difference between Daniel Ortega and Nicolás Maduro. According to Almagro “Ortega governs Nicaragua; Maduro represses Venezuela.”

Azahalea Solis, of the Alianza Cívica, said that Almagro’s words demonstrated “that he is not keeping up with the situation in Nicaragua.”

Solis then added that political prisoners have not been freed; they have been excarcerated, as no one has been given back properties or documents taken from them. “Aside from that, persecution and intimidation agains them has not ceased.”

A group of Nicaraguans travelled to Medellín to participate in the OAS General Assembly.

Montenegro participated in the panel titled “International Justicie in the Americas and the Challenges of the Prevention of Crimes Against Humanity,” where he spoke about the Ortega-Murillo amnesty law.

Montenegro stated that there was no system of checks and balances in Nicaragua, because the branches of government were not independent. “The executive, judicial, and legislative branches collude with each other [in Nicaragua],” said Montenegro.

The member of Defensores del Pueblo said that “open violations of the law” were happening in Nicaragua. The Public Prosecutors’ Office overcharged individuals who had participated in the protests, often accusing them with terrorism. As a result of overcharging “the safest country in Central America became the country most plagued with terrorism in the entire region.”

Montenegro also spoke of the Amnesty Law passed by the Ortega-Murillo legislature. The lawyer indicated that the inclusion of a non-repetition clause in the law was a misapplication of the principle of “non-repetition” that applies to states that violate human rights.

“This is a principle that applies to states that have violated human rights […], but in this case, it was included to keep a kind of Sword of Damocles hanging over the people who participated in the protests. […] The law says that beneficiaries must ‘abstain from repeating the conduct’ that led to their imprisonment, but what are these conducts? it can be carrying the flag, participating in a march, or handing out a bottle of water to protesters, like Alvaro Conrado did. […] we have plenty of cases, and we can identify the anomalies and irregularities in the application of the law.”